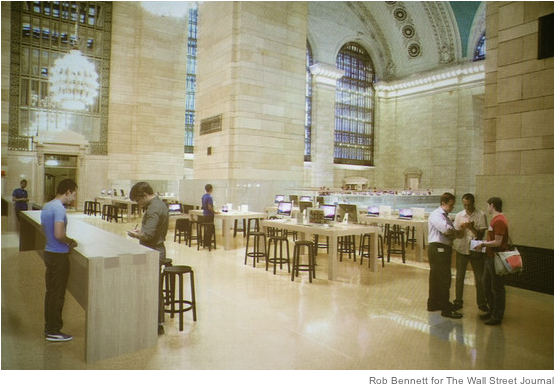 As a Grand Central commuter into New York City, this whole Apple Store thing has been surreal.  The WSJ posts some renderings of what the store would look like and frankly, it is amazing.  The Store is so big and open that Apple will become part of Grand Central.

New details emerged today.  Should the Board approve Apple’s bid on Wednesday, Apple will begin construction immediately and it is estimated to only take 4 months to build out the new Store?!  So, theoretically it is open for the holidays. 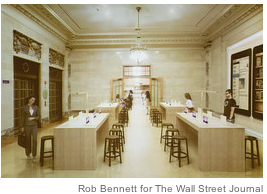 Also, more information on the ouster:

Apple is paying Charlie Palmer’s Metrazur restaurant $5 million to vacate its space on the terminal’s east balcony more than eight years before its lease expires. The MTA will get significantly higher annual rent: $1.1 million from Apple vs. $263,997 from Metrazur.

In addition to the space currently occupied by Metrazur, Apple will move into an adjacent, currently vacant balcony on the northeast side of the terminal.

If that weren’t enough (and it is) the MTA announced that there was a Shake Shack going into Grand Central as well.

And if that weren’t enough, at today’s announcement the MTA piled it on the lowly Penn Station commuters like Dr. Macenstein:

“It maintains Grand Central as the iconic structure and place that it is,” Metro-North Railroad President Howard Permut said at a meeting of the MTA board’s railroad committee. That committee oversees Metro-North, which controls the terminal.

During his presentation, MTA Real Estate Director Jeffrey Rosen announced both the Apple store and a new Shake Shack for the terminal.

“I can’t imagine why any kid in Westchester would want to do anything other than go into Grand Central and shop at Apple and eat at Shake Shack,” Rosen said.

Board members wryly noted that Penn Station, Grand Central’s less glamorous sister across town, will not be offering such sleek retail any time soon.

“Kids from Long Island and Jersey can take the 1 and 2 and then the shuttle” to buy iPads and Shackburgers, said Pat Foye, the board member from Nassau County.

The board member from Suffolk, Mitchell Pally, followed his lead:

“This creates not only a digital, but a cheeseburger divide, between the two.”