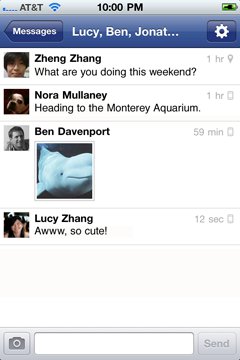 Facebook has released Facebook Messenger which is an extension of Facebook’s Messages service and will allow you to send a text message to your phone’s contacts and a Facebook message to your Facebook contacts.  Bonus: You get to send pictures as well.

The app obviously competes with Apple’s iMessage, Blackberry messenger and all of the other silo-ed messaging apps out there but with a user base of 700 million+, it is well positioned to be a contender.

Messenger is available in both the iTunes App Store and Android Market and is based off the Beluga technology which the company recently acquired.  With all the Google+ noise of late we’ve forgotten about Facebook’s assault on mobile.  They’re back.

Update: Oh, and there is video conferencing hidden in the app.