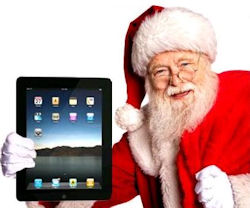 Another day, another analyst making bold predictions about Apple. Though this time it’s the usually accurate Jason Schwarz. In a post on SeekingAlpha.com (via Forbes) Schwarz writes:

“With the era of the laptop coming to an end how should we extrapolate Apple’s recent quarter of 9.25 million iPads into the holiday quarter? It’s logical to assume that the iPad will mirror the growth that the iPhone experienced in 2010 as it grew from 8.4 million units sold in Q2 to 16.2 million in Q4, 92% growth. We also take into consideration the 183% year over year growth that the iPad experienced in its most recent quarter to come up with a forecast of 21.9 million iPads to be sold in this year’s holiday quarter.”

2011 has been a difficult year for Apple’s tablet competitors. HP recently halted production of their WebOS powered TouchPad device after only three months on the market (though it has been selling well at $99). Blackberry’s new PlayBook has been panned by many reviews. Android manufacturers have been sued by Apple for violating many of their software patents. Even laptop manufacturers are starting to feel the pain of the increasingly popular and powerful tablet. Traditionally the holiday quarter has always been the strongest for Apple. Furthermore, we would be remiss to leave out the very unlikely possibility of a rumored iPad holiday refresh. Such an event, though unlikely, could help push these numbers into the stratosphere.

It’s pretty amazing to see how far the iPad has come in such a short period of time. Starting out for many as “just a big iPod touch”, the device has matured and found a place in millions of homes throughout the world. The iPad has played a major role in defining and boosting the stagnant tablet market. Could it help boost that market beyond laptops in 2012? 22 million sales for the holiday quarter would certainly be a good start.