Apple officially ranks number one in retail sales per square foot, according to a new study published by retail analysis firm RetailSails that analyzed 160+ top U.S.-based retailers. As you can see from the graphic above (full graphic below), Apple is almost two times ahead of their closest competitor (Tiffany & Co), and almost five times ahead of the closest technology related retailer (GameStop). What’s most impressive is the fact Apple has much less experience in retail (ten years as of May) than most of other retailers included in the study.

Apple has been on a roll lately opening new retail shops in the US, UK, Spain, and then three more slated to open in Charlotte, Little Rock, and Paris this weekend. This is all part of a massive retail expansion which recently lead the company to become the nation’s fastest growing retailer, according to USA Today. Apple retail stores in the U.S. grew nearly 80% from the year prior with U.S. retail sales increasing $4.6 billion during the first quarter of 2011.

That increase accounted for one-fifth of all sales growth by publicly traded retailers in the U.S., according to a recent analysis of sales trends by retail sales expert David Berman.

Keep in mind these numbers are only including U.S.-based retailers (apart from two who do the majority of their business in the US). Apple is rapidly expanding abroad as well with a possible shop in Russia, and other stores popping up all over the EU, many of which make up the thirty new stores the company plans on opening by September of this year. Full graphic from RetailSails below, if you’re interested. 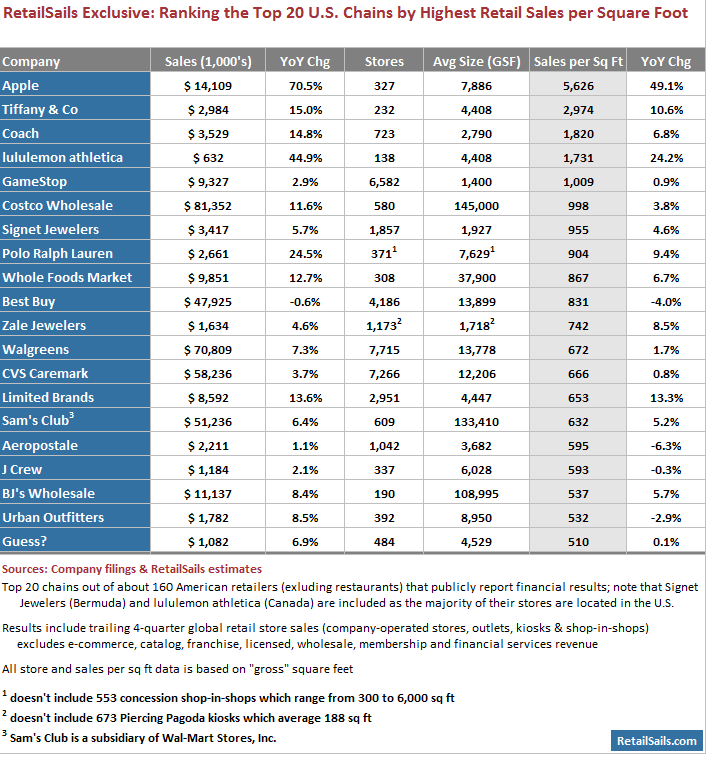