Back in May we reported that Bungie, the game studio behind the legendary Halo series of games on Xbox 360, was working on their first game for iOS. Since that time Bungie has announced a new venture, Bungie Aerospace, that is aimed at helping indie developers make incredible games. According to the studio:

Bungie Aerospace was created to help small, independent developers launch their mobile and social games. Bungie Aerospace gives studios the creative freedom and the resources they need, like access to the Bungie.net platform and an audience with the incredible Bungie community, to launch entertainment experiences into orbit and to satisfy their own thirst for world domination.

This evening the studio announced the release of their first iOS game, Crimson Steam Pirates, which is available for free on the App Store. The game is only available for iPad and while the first 8 missions are free, the remainder can be unlocked via in-app purchase for $1.99. From the iTunes description:

In Crimson: Steam Pirates, plumes of black smoke fill the blue Caribbean sky as Thomas Blood’s pirate fleet steams ahead—over, above, and below the waves. On the surface, ships bristle with swivel cannons and lightning guns. Above, zeppelins drip with incendiary bombs. And below, silent and deadly, submarines stalk their targets, torpedoes at the ready.

Command your fleet and your Steampunk crew using an elegant action interface. Crimson: Steam Pirates’ turn-based gameplay provides an addicting mixture of strategy and action as you anticipate your enemies’ moves and counter them, luring them into a deadly hail of weapons fire while uncovering the mystery brewing in the Caribbean.

Bungie has a storied history that began on the Mac, unveiling the first Halo game at Macworld ’99 long before the original Xbox release. However soon after that demo on stage with Steve Jobs, Bungie was snatched up by Microsoft and, well, we would usually say the rest is history. But Bungie was able to win their independence from Microsoft, leaving the rights to their beloved Halo series behind. After fulfilling their Halo obligations to Microsoft Bungie began looking forward to new devices and platforms for their games. Considering their success it speaks volumes that the first post-Microsoft platform that they chose to release a game for is iOS. It certainly is great to see them back where they began, and we have no doubt that this is just the first of many great iOS-related things that we’ll see from this studio and their developer behind the project, HareBrained Schemes. 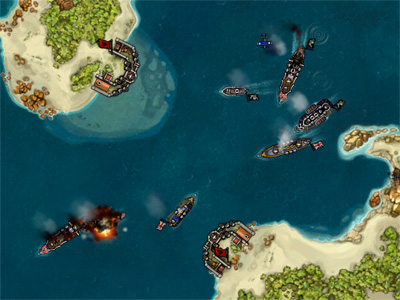 You can download Crimson Steam Pirates for Free (iPad only) on the App Store.