Your iPhone, iPad, or iPod touch sits and charges on a built-in dock, allowing you to project photos, movies, and presentations from your iOS device to a big screen. Both of the two models in the series can spit out an image up to 12 times larger than a 40-inch screen, and include built in stereo sound with two 10-watt speakers. 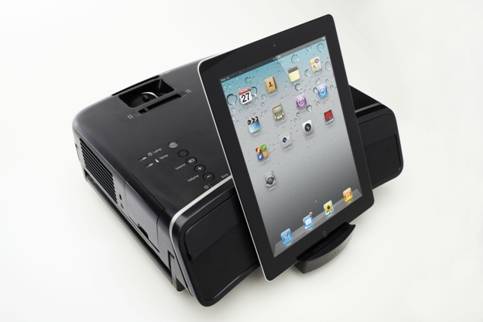 The Megaplex MG-850HD ($800) is the more expensive of the two models on offer and sports HD 720p resolution and 2800 lumens color, and a built-in mic. The MG-50 model is pretty much the same only without the 720p resolution and costing a hundred less at $700.

Both projectors can also be connected to other devices via the built-in HDMI, VGA, and USB ports, although it has clearly been designed as a companion for iOS devices and even marketed as an all-in-one projector and “Apple-Device Dock Combo”. The Epson MegaPlex projectors are expected to launch by the end of the month.