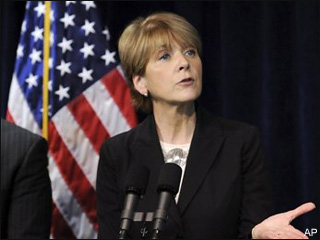 During an event this afternoon, Massachusetts Attorney General Martha Coakley stated that her office would begin looking into fraudulent purchases on the iTunes Store. Coakley herself was a victim of fraudulent purchases, after her credit card was stolen and used on the Store — reports ThreatPost.

Coakley said that her investment in protecting consumers from identity theft was personal, acknowledging that her bank account was emptied after cyber criminals stole her debit card information during a ski trip to New Hampshire. It was not the first time Coakley had mentioned the incident in public. After skimming the card info, Coakley said the thieves attempted to use it to purchase a laptop from Dell Computer, which detected the fraudulent transaction and contacted Coakley. Not so Apple, whose iTunes media store was used to make a slew of transactions that emptied the Attorney General’s account.

Coakley’s case is that while Dell was able to recognize that her credit card was stolen, iTunes wasn’t able to, and her card was then drained in a short amount of time from a huge amount of Store purchases. Coakley cites that these circumstances fall under the State’s data privacy law, and her cabinet will begin an investigation against Apple. A stumbling block however, is that it’s not clear whether Apple holds the credit card data (Apple often touts that they’ve got xx million credit cards on file) or that it just merely passes through without Apple’s knowledge according to the report.