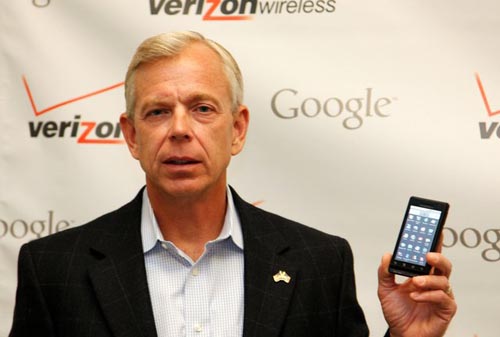 At an investor conference yesterday, Verizon CEO Lowell McAdam made the simple argument:

I have taken the position that the AT&T merger with T-Mobile was kind of like gravity. It had to occur, because you had a company with a T-Mobile that had the spectrum but didn’t have the capital to build it out. AT&T needed the spectrum, they didn’t have it in order to take care of their customers, and so that match had to occur.

I don’t think that I’ve heard a rationale for the merger stated more succinctly.

But coming from AT&T and T-Mobile’s biggest rival, you know it is a bunch of horses**t.

Since when does a company CEO say something to the effect of “We want our competitors to be stronger and better equipped to compete with us and take our customers”?

The reason why Verizon is in favor of the deal is because it eliminates a low-cost player in the market and brings the U.S. closer to a telecom duopoly, in which AT&T and Verizon can set prices.  Just recently, Verizon was forced to offer a $50 pre-paid data plan that competes with Sprint’s Virgin and T-Mobile.  With Verizon/AT&T running the show, they won’t need to make moves like that.

It’s pretty obvious to anyone not on an AT&T or Verizon payroll (including fifteen members of Congress led by North Carolina’s Heath Shuler) that a merger would be horrific for wireless competition in this country.

No one with an eighth-grade education really believes that any merger, telecom or otherwise, has ever created jobs or competition in the marketplace which is what AT&T is somehow trying to argue. Hopefully this thing is killed. Soon.