Update: He’s wrong.  We’ve heard from an impeccable source that Google plans to have invites out “in the next day or so” and there is no patent delay.

We reported earlier that Google and Samsung were delaying the release of the new Nexus Prime phone and Android 4.0 “Ice cream Sandwich” out of respect for the passing of Steve Jobs.

“We believe this is not the right time to announce a new product as the world expresses tribute to Steve Jobs’s passing,” the companies said.

But according to often (but not always) correct blogger Eldar Murtazin, there are patent issues at hand which need to be addressed before the devices and OS  ship.  Specifically, Google is slicing out features which may be subject to Apple’s Patents… 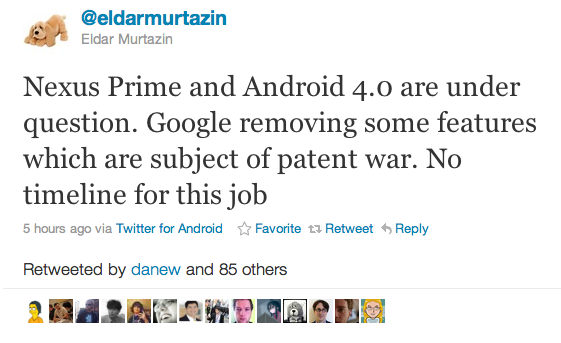 See Steve Jobs introducing multi-touch in 2007 below, saying “Boy have we patented it!”.  More coverage at 9to5google.com