Over in the MacRumors Forums, some guy says he caught his wife cheating using the new Find My Friends app on the iPhone 4S.

I got my wife a new 4s and loaded up find my friends without her knowing. She told me she was at her friends house in the east village. I’ve had suspicions about her meeting this guy who lives uptown. Lo and behold, Find my Friends has her right there.

I just texted her asking where she was and the dumb b!otch said she was on 10th Street!! Thank you Apple, thank you App Store, thank you all. These beautiful treasure trove of screen shots going to play well when I meet her a$$ at the lawyer’s office in a few weeks.

So he really didn’t “catch her cheating”, but she appears to be lying about her whereabouts. He later provides pictures: 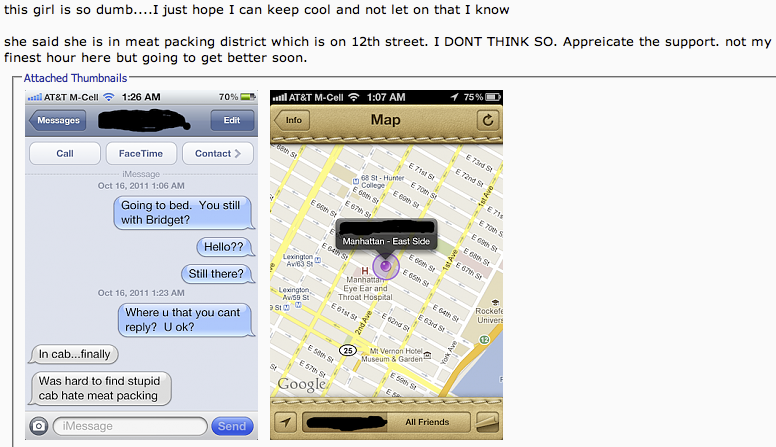 Now, this account could easily be faked but it does bring up some privacy issues. Sure Google’s Latitude and other GPS utilities could be used for such nefarious purposes before, but as Apple often does to technology, this is now mainstream.  GPS tracking is now easy to access and in a lot more hands.

So how far should people be able to go with these things?  Should this data be admissible in civil court? An Android user used his GPS data to help him get out of a speeding ticket, but could your location data also get you in trouble?