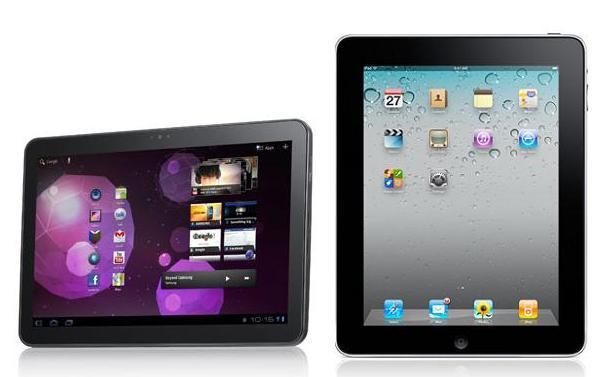 According to research firm Strategy Analytics (via Bloomberg), Google’s Android-based tablets gained market share in the iPad dominated tablet market during the third quarter, specifically led by new models from Samsung (presumably referring to the same Galaxy Tab family that is currently the focus of patent related litigation between Apple and Samsung).

The report claims Android was up from just 2.3 percent from the same three month period last year, to a 27 percent share of worldwide sales during the third quarter in 2011. The iPad’s market share during the same period reportedly fell from 96 percent to 67 percent. The research firm notes that Samsung’s Galaxy tablets currently account for 9 percent of the total tablet market.

There is also reason to believe Android’s growth on tablets will continue to grow into 2012, as the introduction of Android 4.0 Ice Cream Sandwich (the first Android OS specifically designed for both phones and tablets) could help tablet adoption among Android smartphone users. Strategy Analytics believes that Amazon’s Kindle Fire will also drive Android tablet sales, estimating the company will sell more than 15 million units by 2013.

In contrast to this obvious good news for the Android tablet market, which the WSJ’s Walt Mossberg recently described as having “flopped” in an interview with Google mobile chief Andy Rubin, there are conflicting stats for Android tabs in the enterprise. Rubin’s answer? “There’s a little over 6 million Android tablets that we know about”, a figure which of course includes pre-Honeycomb devices but not the Nook and those that don’t use Google services. The recently released Good Technology Device Activations Report for Q3 2011 shows that when it comes to tablets in business, enterprise users are clearly choosing iPad over the alternatives, noting “iOS tablets represent over 96 percent of total tablet activations”. Their graphic (above) also speaks volumes.

“While more and more devices running the tablet-tuned Honeycomb version of Google’s Android operating system have been released, Android tablet activations within Good’s customer base remain in the realm of a rounding error compared to what we’re seeing with the iPad and iPad2.”

The Good Technology report did claim that total net iOS activations fell from 78.7 percent in Q2 to 70.8 percent in Q3. Meanwhile, total Android activations “steadily grew” during the quarter landing at an average of 29.2 percent. However, it’s important to note that even Good attributes the dip in iOS activations to anticipation over the iPhone 4S, and the fact that the majority of users already have iPads as the “early adoption phase is over”. They do partly attribute Android’s rise to popularity among 4G devices such as the HTC Thunderbolt and EVO 4G, which makes us think about TeliaSonera’s Tommy Ljunggren’s comments about the importance of LTE capabilities in a next-gen iPhone.