Eric Schmidt: “Android efforts started before the iPhone efforts. And that’s all I have to say” 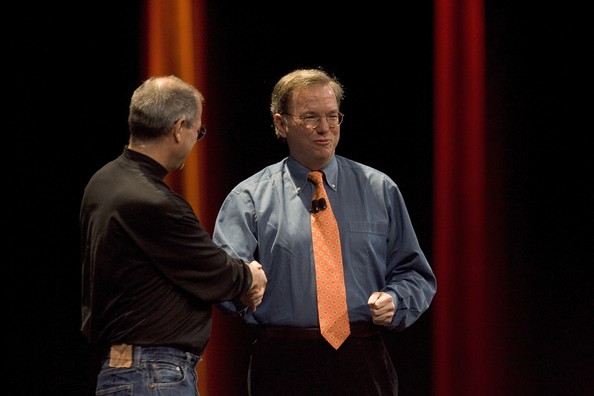 According to the Associated Press (via Winnipeg Free Press), Google’s Eric Schmidt attended a press conference during his first visit to South Korea since 2007 on Tuesday where, among other things, he was asked his opinion on Steve Jobs’ claims that Android is a “stolen product”. While calling Jobs a “fantastic human being” and saying he is still “very sad and recovering from the sense of loss”, he had this to say regarding claims that Google ripped off key features of the iPhone for Android:

“I decided not to comment on comments that are written in the book after his death. I don’t think it’s right…Most people would agree that Google is a great innovator, and I would also point out that the Android efforts started before the iPhone efforts. And that’s all I have to say.”

Google purchased Andy Rubin’s Android in 2005 but it is likely that development of the iPhone began looong before the 2007 unveiling.  Also, Android did seem to change significantly from a Blackberry-ish type of device to a more touch centric device (coincidentally?) right about the time that iPhone was released.

It was revealed prior to the release of the authorized Steve Jobs bio penned by author Walter Isaacson that Jobs shared with Isaacson his opinions on Android’s blatant copying of innovations Apple first debuted in the iPhone. Here’s the full quote from the book:

“Our lawsuit is saying, “Google, you fucking ripped off the iPhone, wholesale ripped us off.” Grand theft. I will spend my last dying breath if I need to, and I will spend every penny of Apple’s $40 billion in the bank, to right this wrong. I’m going to destroy Android, because it’s a stolen product. I’m willing to go to thermonuclear war on this. They are scared to death, because they know they are guilty. Outside of Search, Google’s products—Android, Google Docs—are shit.”