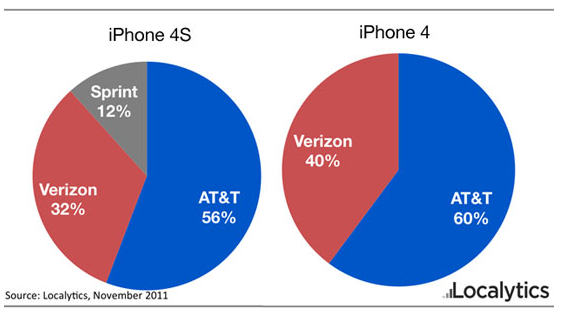 According to Localytics, AT&T continues to be the dominant iPhone carrier in the US, even with the Verizon entering the market strongly last year, grabbing 40% of the users in half the time.

As the 4S was launched on Sprint as well with truly unlimited data plans, one would have thought more of AT&T’s marketshare would have been diminished.  However, it appears that sprint is taking more away from Verizon.

Sprint’s share of the 4S market now stands at 12% according to the figures.  AT&T, though coverage is spotty in urban areas like New York and San Francisco, does have a significant speed advantage over Sprint and Verizon’s 3G as well as the ability to talk and use data at the same time.

Looking at iPhone 4 distribution as a comparison, Sprint seems to have eroded more of Verizon’s market share than AT&T’s – of the previous-generation handset, 60% are on AT&T versus 40% on Verizon.

A likely driver for these differences is the fact that AT&T can mine its existing base of iPhone users. Because all Verizon iPhone users are in the first year of their wireless contract, the cost of upgrading will be high. However, many longer-term AT&T users, especially those holding iPhone 3GS and earlier devices, are off-contract or nearing the end of their contract. AT&T has been aggressively leveraging the iPhone 4S to sign these customers to new two-year contracts, and the data in this study suggests that tactic may be working.