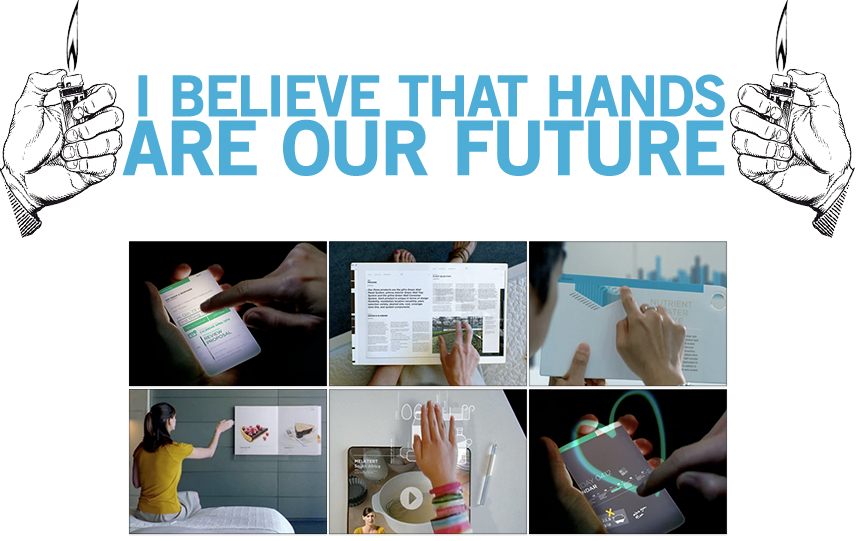 Former Human-Interface Inventor at Apple Bret Victor doesn’t think Microsoft’s recent vision of the future depicts a visionary or innovative approach to interaction, calling it a “timid increment from the status quo”. Victor, who worked on UI concepts for iPad, iPod nano, and “half a dozen experimental hardware platforms” at Apple, thinks envisioning future products with the standard, stiff touchscreen is limiting, calling it a “pictures under glass sacrifice” that amounts to a “hokey visual facade”. He explained on his blog:

“Pictures Under Glass is an interaction paradigm of permanent numbness. It’s a Novocaine drip to the wrist. It denies our hands what they do best. And yet, it’s the star player in every Vision Of The Future. To me, claiming that Pictures Under Glass is the future of interaction is like claiming that black-and-white is the future of photography. It’s obviously a transitional technology. And the sooner we transition, the better.”

Victor’s thinking is when using touchscreens we are sacrificing what he calls the “tactile richness” of how we manipulate everyday, real-world items. As an example, Victor describes the main functionality of a touch screen being the ability to slide a finger along the surface to manipulate elements, a motion we almost never use to manipulate real-world items. He then provides the following examples:

“Notice how you know where you are in the book by the distribution of weight in each hand, and the thickness of the page stacks between your fingers. Turn a page, and notice how you would know if you grabbed two pages together, by how they would slip apart when you rub them against each other…. There’s a reason that our fingertips have some of the densest areas of nerve endings on the body. The next time you make a sandwich, pay attention…the myriad little tricks your fingers have for manipulating the ingredients and the utensils and all the other objects involved in this enterprise. Are we really going to accept an Interface Of The Future that is less expressive than a sandwich?”

So what is Victor’s vision of the future? While he doesn’t touch much on a clear vision that would differ from the pictures under glass experience we are all currently stuck with, this is his plea:

…be inspired by the untapped potential of human capabilities. Don’t just extrapolate yesterday’s technology and then cram people into it.Look down at your hands. Are they attached to anything? Yes — you’ve got arms! And shoulders, and a torso, and legs, and feet! And they all move!…With an entire body at your command, do you seriously think the Future Of Interaction should be a single finger?