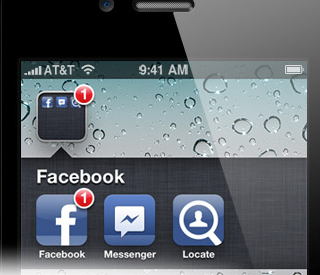 Developers of the Find My Facebook Friends app have had quite a rough time getting their app past Apple’s App Store review team. The app was originally called “Find My Friends For Facebook” until Apple rejected the app name and icon for being too similar to its own Find My Friends app, forcing the developers to resubmit the app with a new icon and name. While the app has been live in the App Store and steadily growing among users as “Find My Facebook Friends” since March, the developer told us today that it is once again being forced to change its name—but this time by Facebook.

After a few emails with Facebook’s Platform Operations team, Find My Facebook Friends has now been renamed “Locate”. Facebook also requested the developer remove the “f” logo, and then alter the white silhouette used in its icon. It appears Facebook’s platform policy and trademark rights allow iOS developers to use “for Facebook” in their app titles to clearly indicate the app is “for” Facebook and not an official app. However, there are many apps, such as Facebook Chat+, that seem to violate Facebook’s policies the same as Find My Facebook Friends, and they have been available in the App Store for almost a year. The developer noted Facebook contacted him after briefly testing its location-based Find Friends Nearby feature, which did not include the exact same functionality. However, it could easily be confused with Find My Facebook Friends by its title alone. The app still includes the same features, allowing you to locate Facebook friends on a map, receive proximity alerts, and more, but it is now available as “Locate: Real-time Location Sharing for Facebook” in the App Store.