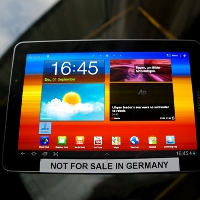 A few months before Apple is set to release a 7.85-inch tablet of its own, it convinced a German court to ban Samsung’s similar-sized, year-old offering based on the look and feel of the 10-inch iPad. The ban would extend to the entire 27-member states of the European Union should it hold. Strangely, the same court decided that an iPad-sized 10.1N variety of the Galaxy Tab, which was just a 10.1 with a superficial makeover, should not be banned.

Samsung was both happy…

“Samsung welcomes the court’s ruling which confirms our position that the GALAXY Tab 10.1N does not infringe Apple’s intellectual property and does not infringe laws against unfair competition. Should Apple continue to make legal claims based on such a generic design patent, design innovation and progress in the industry could be restricted.”

“Samsung is disappointed with the court’s ruling. We will continue to take all available measures, including legal action, to protect our intellectual property rights and defend against Apple’s claims to ensure our products remain available to consumers throughout the European Union.”

In more Apple-Samsung patent dispute news, according to FOSS Patents, Apple filed to seek $2.5 billion in damages from Samsung for infringing on its patents. About $2 million of that sum is just for design patents.

The Cupertino, Calif., -based Company apparently used its own analysis to detail how Samsung’s patrons will shell out up to $100 more for a device that boast Apple-patented features. It even detailed the value of those features. For instance, the “scrolling API” feature is worth $3.10.