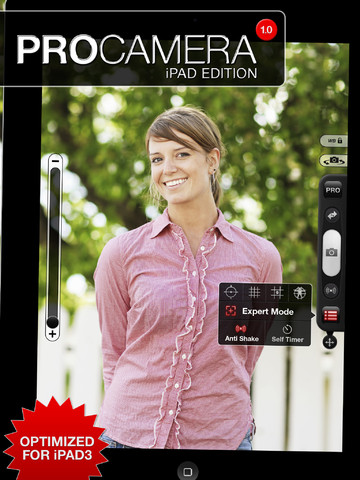 Cut the Rope version 1.9: All the versions of Cut the Rope have been updated today with the new “Spooky Box” bringing 25 new levels that feature “ghosts that morph into different gameplay elements.” Also included in the update is new superpowers allowing players to control candy within the game area and access a fourth star that unlocks additional levels.

ProCamera HD: The full-featured professional camera app previously only available for iPhone has finally made its way to the iPad with the release of ProCameraHD. The app is half off to celebrate its launch.

The iPad is an essential travel companion, especially when it comes to taking videos and photos. With the built-in iPad 5-megapixel camera you can take high-resolution photos and 1080p HD video (720p HD video on iPad 2). The new ProCamera HD app takes pictures and videos better and faster, and helps you get more out of your images with the expert mode and other tools! The SnapTrigger is perfectly adapted to the iPad: You decide where the control bar is located on the screen; this allows you to take photos and videos your way. The new internal library Lightbox allows you to delete, share, and export multiple photos and videos easily.

Doodle Jump version 3.0: A huge update to the popular Doodle Jump game from developers Lima Sky. In its biggest update yet, the game now includes a new Ninja theme with “all-new power-ups, monsters, obstacles (read: BEAR TRAPS), and COINS that you can collect.” The update also includes a ton of other new outfits, abilities, and upgrades.

Well version 1.1: This new social app —developed by former Digg, Blip.fm, and Rackspace engineers— essentially allows users to share their To-Do lists. A few key features include suggestions from friends, and the ability to re-list interesting To-Dos, as well as popular lists for discovering content and more. Visit http://well.io/ for more information.

TV Guide version 3.0: The official TV Guide iOS app received a complete redesign today with a bunch of new features for its over 7 million users. A full list of what’s new is below:

– Watchlist – your super-personalized TV Guide: Organize your favorite shows, sports teams, movies, and actors and find where you can watch them – on TV, on demand, streaming and DVD.

2. Trending – a social hot list based on what TV Guide users are watching

3. Watchlist – only your favorite shows

– Listings: Detailed info about every airing with the ability to:

1. Set up alerts and never miss a live airing

3. Filter by HD-only and favorite channels