Don’t call it ‘Instascraper’: Why you can’t read 9to5Mac on Instapaper

Update: Matt Buchanan from Buzzfeed probably has a better version of this. The Atlantic too.

I do not personally use Instapaper, but I know a few of our 9to5Mac readers do. We’ve covered the app on a number of occasions in the past and even have covered interviews with its developer, Marco Arment. But, as of this mostly unrelated post, 9to5Mac readers who tried to save our posts on Instapaper were greeted with this message:

That was a lie. The publisher (us) never chose to remove our content from Instapaper. After some coaxing, Marco changed the message this morning to this: 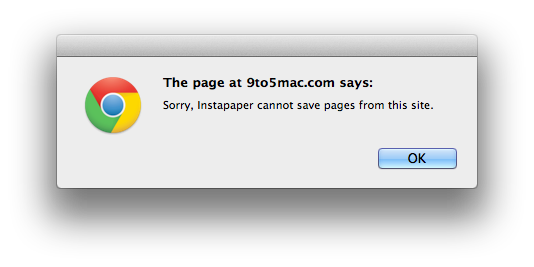 That is also untrue. Instapaper can save pages from 9to5Mac. Marco is just blocking us (and only us). If he were being honest to his users, he would say something like, “I don’t agree with the site’s content and therefore Instapaper won’t show content from the site.”

But it still does not explain why Marco chose to censor 9to5Mac from Instapaper. The problem seems to have started with our coverage of his iPad mini log files. In the post, we wondered if the iPad minis he found in his logs were verified to be in Cupertino via IP (Apple’s campus and Stores use 17.x.x.x IP addresses).

Arment’s concern was likely the public perception of whether or not he was logging the IP addresses and therefore the geo-location of his users. (We do not care one-way or the other. We were just interested if the iPad mini hits were coming from Apple’s Campus, thereby dramatically improving the likelihood of them being real.)

He also made fun of (us?) misspelling his name.

A lot of people laughed and joked about the misspelling on Twitter. We did too.

Fast-forward a week…and Marco’s Instapaper came up again in a post about the FBI operative having access to millions of UDIDs. One of the folks at HackerNews wondered if it was related to Marco’s DB servers being snagged in an unrelated ISP confiscation last year. We presented that postulate, while fully acknowledging that we have absolutely no idea about whether it was related, and others did as well:

Indeed, as part of the discussion about the situation, it had been suggested that the data was more likely to be from an app developer’s database. The FBI erroneously seized an Instapaper server in 2011, for instance, and the data could have come from that event.

On Twitter and email, he claimed this was his reason for being upset:

However, it appears that was a Red Herring. In fact, in his post on the matter, he erroneously accused another app of being the cause of the leak.

The popular and free AllClear ID app, related to NCFTA, is a likely culprit, especially given the filename. AllClear ID sent a statement saying they do not collect UDIDs and are not affiliated with the NCFTA, for whatever it’s worth.

(It turns out it was likely another app.)

But in updating, I spelled his name wrong —”Marcus Armento”—as a laugh. I also linked to his Tweet above regarding the wrong spelling of his name and the funny replies it received. I do not think he was upset about his name, though.

This whole thing is likely about three simple letters. I (also jokingly) called his app “Instascraper,” which publishers often call the app because it removes ads from the websites it views. “Scraping” is what publishers call bots and other robot services that strip content from a website and republish it without any financial payment to the content creator.

For the record, I honestly do not care about ad revenue lost to Instapaper. Instapaper is such a microscopic (yet vocal!) part of 9to5Mac’s readership and people have to view a page (including ads) to add a page to the app. We frankly want what makes our readers happy. You can use a Radio Shack TRS-80 to view 9to5Mac, if you want.

Yes, now you know: Many publishers call Instapaper “InstaScraper” behind Marco’s back, and it is probably insulting and embarrassing for Marco to know this. I was not considering his feelings when I wrote it, obviously, and for that I am sorry.

It is not nearly as bad as this story from the Awl however:

It was pointed out early on that Instapaper is, at best, copyright infringement.

Instapaper costs $4.99 for app use, and it’s a “a regular business run by a regular person, so it earns income to cover its costs.” None of those costs are fees to republish in full content published elsewhere, which is exactly what Instapaper does. They do however provide an “opt-out” for publishers: “To opt out, have your site’s legal owner or copyright agent click here to contact Instapaper with the internet domain names of the site(s) you wish to opt out of text-parser compatibility. Please provide contact information for identity verification, including a daytime office phone number.”

They note that no “major publishers” (whatever those are) have yet opted out.

Readers viewing the website from third-party aggregation were able to add 9to5Mac posts to Instapaper (not sure if this is still the case).

In the end, I really do not care if we are or aren’t on Instapaper (this is a clarification post). I obviously will not lose any ad revenue from the censorship. Moreover, with Apple’s own Safari Reading List and many other alternatives popping up, there are plenty of “Read it later” alternatives that will not censor what you want to read.

For me, it is important to clarify for the record: this was not our choice. Additionally, for the record, I have been emailing Marco since we were blacklisted to find some middle ground. He decided not to respond directly.

Just as Instapaper does for Marco, 9to5Mac.com puts food on my kids’ plates. We hope this puts an end to the situation and can come together on a solution. If nothing else, we hope Marco puts his users above his own feelings and desire to ‘punish’ us.

Update: Marco apologized and restored our website. Yipteedoodah.  I am not going to lie and say I agree with much of his point of view of the events, but I am happy for readers who want to use that service. I am also happy to put this behind us. Moreover, I want to apologize to Andrew. TallestSkil wins best comment below.