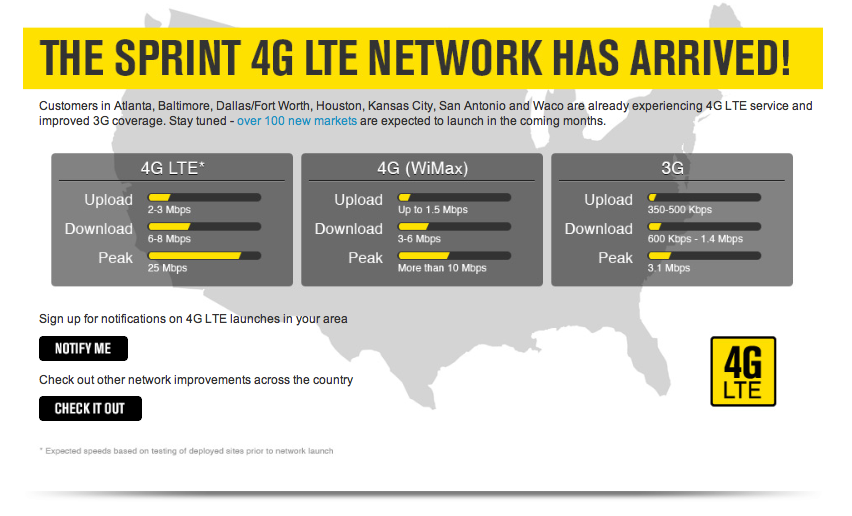 Sprint offers the iPhone, but it does not carry the 4G LTE iPad partly due to its thin LTE spread. The carrier is steadily thickening, however, so perhaps it will be on the same LTE footing when the next-generation iPhone debuts in just two days.

According to the press release:

Continuing its aggressive momentum in delivering a top-tier network experience for customers, Sprint announced today that the 4G LTE network build is under way in more than 100 additional cities within its existing nationwide 3G footprint. Some of the major metropolitan areas in which Sprint 4G LTE is expected to be available in the coming months are Boston; Charlotte, N.C.; Chicago; Indianapolis; Los Angeles; Memphis, Tenn.; Miami; Nashville, Tenn.; New Orleans; New York; Philadelphia; and Washington, D.C.

Sprint was the first national wireless carrier to introduce 4G (WiMAX) service in 2008; it currently offers 4G LTE service in 19 metropolitan areas. The carrier further revealed today that customers might soon begin to experience 4G coverage during the “pre-launch phase,” and those with 4G-capable devices are “welcome to use the network even before it officially launches.”

Sprint expects complete the nationwide build out of its 4G network by the end of 2013.

“We are committed to delivering a cutting-edge network as quickly as possible, one that provides a greater level of reliability and speed to our 3G and 4G customers,” said Bob Azzi, senior vice president-Network, Sprint. “We know our customers depend on their mobile devices as their primary source of communication, business connectivity and entertainment. We want to deliver a network that delivers mobile access, productivity and entertainment at a highly competitive price point.”

The 4G LTE Network build is under way in the following areas:

During the pre-launch phase, customers with capable 4G LTE devices may begin to see 4G LTE coverage in these areas and are welcome to use the network even before it officially launches. Sprint plans to announce commercial availability of 4G LTE in these cities in the coming months, at which point we expect coverage, performance and reliability to get even better.

According to management consulting firm Chetan Sharma Consulting, mobile data is expected to comprise 95 percent of the global mobile traffic by 2015. Sprint’s network strategy, known as Network Vision, is designed to meet these growing demands. With Network Vision, customers can expect to benefit from an updated 3G network and new 4G LTE network, enabling expanded coverage, improved network reliability, better voice quality, and faster data speeds as the improvements are rolled out across the country.

“The mobile industry is going through an incredible change – smartphones, connected devices, and the seemingly unlimited supply of new applications and services are changing consumer behavior in dramatic ways,” said Chetan Sharma, founder and president at Chetan Sharma Consulting.

As part of its overall network strategy, Sprint is also doing a complete overhaul of its 3G infrastructure so that customers can enjoy better wireless signal strength, in-building coverage, and fewer dropped/blocked calls. These enhancements are now available to customers in several markets across the country, with significant deployment in Baltimore, Boston and Washington, D.C., and will continue to improve in the weeks and months ahead.
Sprint was the first national wireless carrier to introduce 4G on the WiMAX network in 2008 and began rolling out 4G LTE to customers on July 15 in Atlanta, Dallas, Houston, San Antonio and surrounding cities.

Unlimited + Sprint 4G LTE = Game-changing wireless offer for customers
In today’s competitive wireless market, the value of unlimited has never been more apparent and Sprint is clearly the best choice in wireless. Customers with capable devices can combine Sprint’s all-new 3G and 4G LTE networks and enjoy unlimited data while on the Sprint network. Data usage continues to increase and consumers value Truly Unlimited data because it’s simple and straightforward – no metering, no throttling, and no need to share data, which increases the likelihood of a surprise monthly bill because of overage charges.

Coupled with unbeatable plans and fast devices, Sprint has been working hard to deliver the best customer experience in the past few years. The 2012 American Customer Satisfaction Index ranked Sprint No. 1 among all national carriers in customer satisfaction and most improved, across all 47 industries measured, over the last four years. And Sprint has been ranked Highest in Satisfaction with the Purchase Experience among Full-service Wireless Providers three times in a row by J.D. Power and Associates.

Sprint’s Network Vision project expects to be largely complete with the all-new network by the end of 2013. For the most up-to-date details on Sprint’s 4G LTE portfolio and rollout, please visit www.sprint.com/4GLTE.