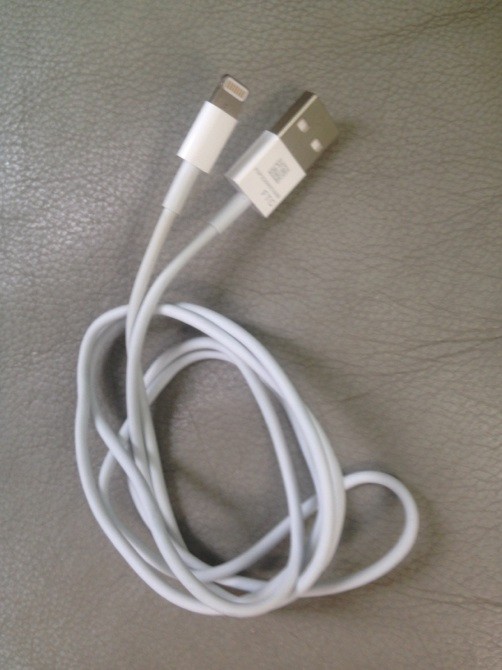 According to our sources, Apple’s new, smaller 9-pin dock connector is dubbed “Lightning” internally. As of this evening, we believe that this name will extend to the new connector’s marketing name. The moniker makes sense for two reasons. One: it goes along with the Thunderbolt connector name on the Mac (Thunderbolt and lightning!). Two: perhaps “Lightning” means that the new dock connector will be able to sync via a computer at faster speeds than the current 30-pin connector. With Apple’s new USB3-enabled Macs, we’d hope so anyway. It will sell for around $20 though previous reports indicated $10

One thing to consider: Apple’s Thunderbolt ports have a little lightning bolt on them. How many newbs will mistakenly try to plug their Lightning cables into that port?

We’re also told that an entirely new version of Apple’s headphones will be announced tomorrow. Last week, a pair of new Apple earphones leaked onto the web (shown above, gallery/video here) with a unique new design. We’re told that these will be called “Earpods” and will retail for the same price as the current headphones – $29 in the US. The acoustics are obviously improved and they may not fall out of your ears every time you turn your head. We don’t now for sure if these will come standard with all Apple iPhones and iPods but that very well could be the case.

We’ve also received word that a couple variations of a new dock adapter between Lightning (get used to it!) and the 30-pin connector will be announced. The first version apparently clips onto the bottom of the new iOS devices. The second is a version with a little cable attached for accessories like tight-fitting cases.

According to a source at a high-profile U.S. retailer, the new iPod shuffle, which we previously reported on, will remain at its current 2GB capacity. It will come in the new lineup of 8 colors: pink, yellow, blue, green, purple, silver, ‘slate’ and red.

Update: This U.S. retailer source also says that the 4th-generation iPod touch will stick around, as we previously reported, but its storage capacity will be doubled from 8GB to 16GB. Though, it will likely keep the same $199 price point.

Lastly, we’re also told that Apple will ship a unique new ‘Loop’ accessory in multiple colors for the new iPod touch. This new accessory will come in white+black, white+red, white+pink, white+yellow, and white+blue and retail for around $10. Perhaps some of these colors will be seen on the fronts of the redesigned iPod touch line.

We expect Apple to announce these products tomorrow and for them to go on sale immediately.