Review: Tweetbot for Mac – blame the $20 on Twitter, the awesomeness on Tapbots 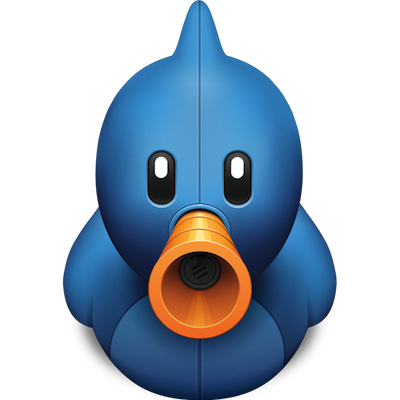 It’s finally here. Tapbots unleashed a new member of their extremely popular Tweetbot family on the world today in the form of Tweetbot for Mac. The new bot has been eagerly awaited by Twitter users since it went into public alpha in the middle of July.

The OS X version of the popular iOS client boasts a similar feature-set, including timeline position syncing between devices via Tweet Marker, and even more syncing options through iCloud. Keep reading for all the details (and a ton of screenshots). 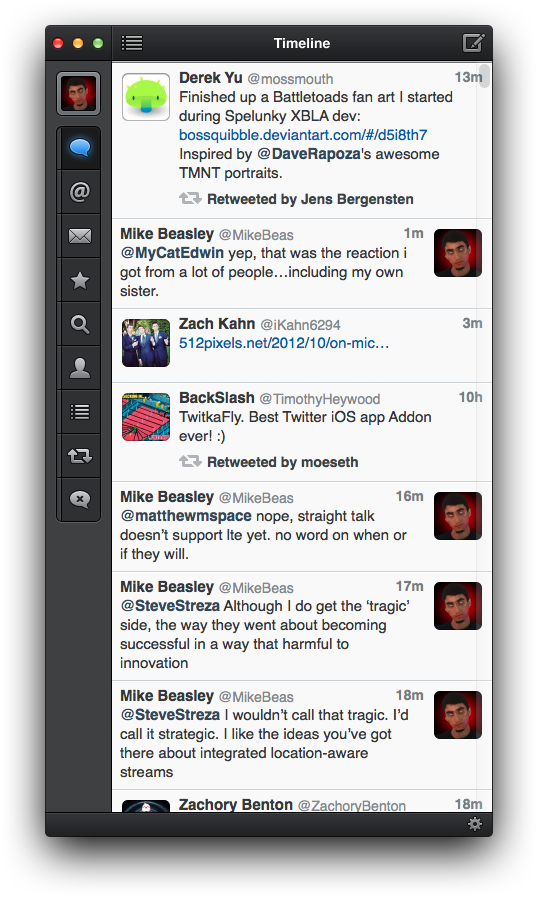 The timeline is the core of any Twitter app, and Tweetbot’s timeline does not disappoint. Not only can you use the main timeline to view your main feed, but you can even use any of your Twitter lists as the main timeline source, giving you an easy way to switch between groups of people you may or may not want in your regular feed. For example, I’ve got a list for the cast of NBC’s The Celebrity Apprentice that I use to watch the live tweets when the show airs. I don’t want most of those people in my feed all the time, so being able to simply keep them in a list without actually following them makes it much easier for me to see what I want to see for two hours each week and then ignore them until the next airing.

Tweetbot features an abundance of information in the timeline, including usernames and real names (as well as the option to show or hide each of those at will),  geotagging information, and retweet info. One incredibly handy feature of the Tweetbot timeline is the placement of profile pictures. As you can see in the screenshot, your own tweets will show the profile photo on the right side, while tweets from other people appear on the left. This makes it easy to quickly spot your tweets when scrolling through your timeline.

As is the norm with Twitter apps, Tweetbot keeps your mentions in a separate feed that you can access using a button on the sidebar or a keyboard shortcut.

Like many other popular Mac clients (and the iOS version of Tweetbot) Tweetbot for Mac uses Twitter’s Streaming API to pull tweets in as soon as they’re posted. You don’t need wait for it to update on a timer or manually refresh the feed. This makes replying to conversations incredibly fast, but can also be a bit annoying if you follow a large number of people.

One feature that many users with Multi-Touch trackpads will love is support for gestures. Swipe a tweet from right-to-left with two fingers to get more information, replies, and the previous tweets in the conversation. Swipe back with two fingers to return to the timeline. Swipe the opposite direction on a tweet and you’ll get the conversation view.

Finally, Tweetbot supports Tweet Marker and iCloud for syncing your position in the timeline. As a bonus, iCloud is also able to sync the read/unread status of your direct messages, along with your mute filters (more on that later) with the iPhone and iPad versions of Tweetbot, ensuring that you never have to read the same tweet twice. 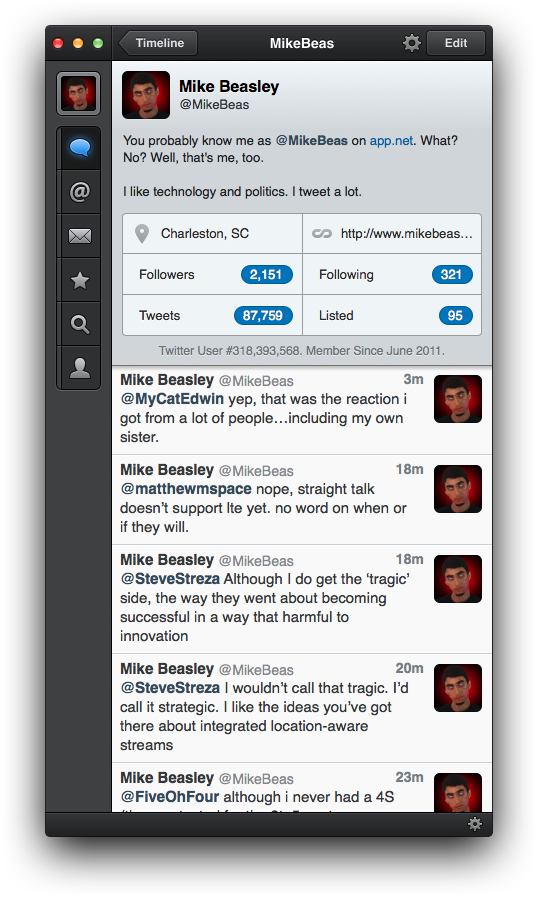 Account pages in Tweetbot cram as much information as possible into the smallest space you can imagine. But instead of cluttered and hard to read, the profile pages are actually surprisingly well-organized. The username and profile photo appear at the top, followed by the bio.

Below the bio is a grid of each user’s statistics: follower count, number of tweets posted, location information, and more. After that is a little tidbit of information that doesn’t serve much purpose, but seems like a nice addition: the user’s account number. Ever wonder how many people joined Twitter before you? Well, 318,393,567 people joined before me. Does knowing this help me at all? Not really, but it’s still fun to know that.

The last thing on the page is a timeline of the user’s tweets. It works exactly as you’d expect it to, with all of the same options and gestures as the main timeline. 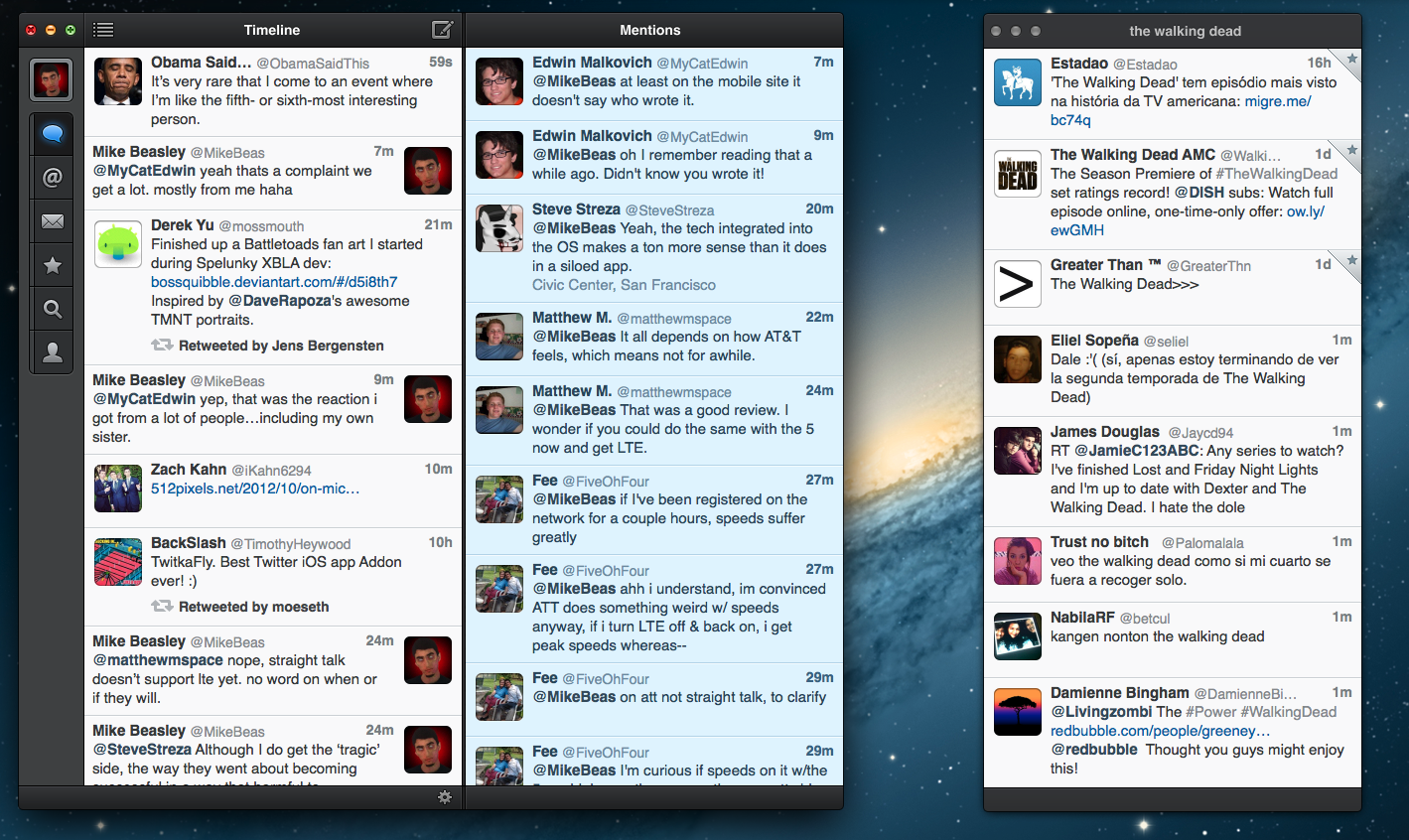 Tweetbot supports a wide array of window configurations, allowing you to customize the app’s layout to almost any needs. Any tab you have open can be popped out into a separate window (see “the walking dead” above), or as a separate column. The difference between the two is that columns are attached to the main window, while separate windows can be repositioned anywhere on the screen. Best of all, you can use a handle along the bottom of the column to break it away from the main window, or to re-attach a window to the main timeline.

For example, in the above screenshot, I could break my mentions column off, reposition it anywhere on the screen, then drag my search window for “the walking dead” over to the timeline and “dock” it there as a column. Tweetbot allows you to have as many columns as you want, so you’re not limited to the one you see in the screenshot above.

To top it all off, most of the tab icons (timeline, mentions, etc.) on the left side of the app can be hidden through a menu bar setting. 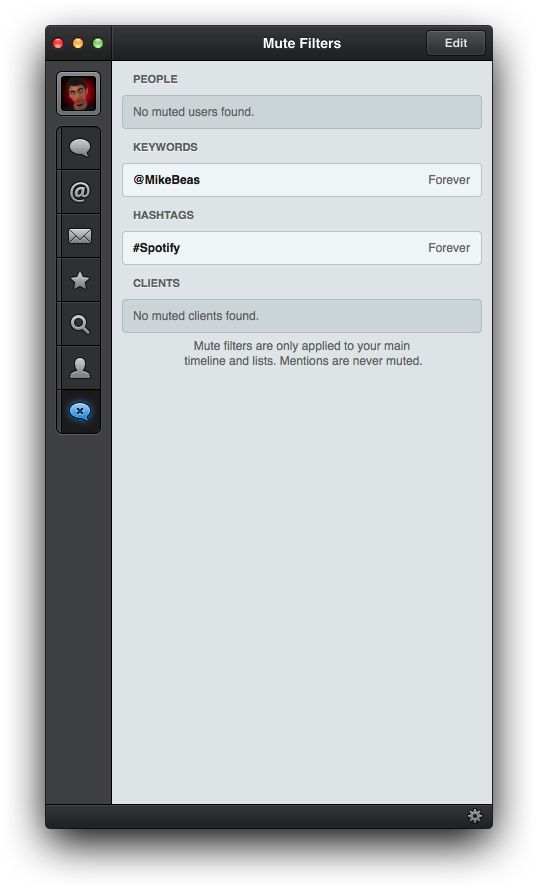 Not everyone enjoys reading about every topic. Thankfully, Tweetbot makes sure you never have to see anything you don’t want to see in your stream. With what is easily the most extensive muting system in any Twitter client, Tweetbot provides four different types of mutable items.

The first is people. You may think this is pretty similar to blocking, and you’d be correct in assuming that. Muting is far less drastic however. With blocking, the person you block will not be able to follow you. That’s not always the most efficient way of doing things. Sometimes you may not want to see someone’s posts retweeted into your timeline, but you still want them to be able to follow you because you’re a nice person, right? That’s when muting is handy. Muted users can still follow you and reply to you, but you won’t see when your friends retweet them. They won’t even know they’re muted.

The second mute filter is for keywords. This is one of the most important, since it gives you the power to block almost anything from your feed, regardless of hashtags, usernames, or any other criteria. Keyword muting also supports Regular Expressions, giving you even more fine-grain control (or broader control, depending on how you use it) of your mute filters.

The last two options are pretty straightforward. You can mute certain hashtags so you never have to see tweets about a certain topic ever again. You can also mute tweets from specific apps, like Spotify, or even Tweetbot, so that people using those apps won’t show up in your feed at all.

As if all of that wasn’t enough, your mute filters will sync between the iPhone and iPad versions if you choose to use iCloud syncing on each device. Add a filter on one device and it works on all of them seamlessly.

Tweetbot for Mac comes with full support for Mountain Lion’s notification Center, and can notify you when you are mentioned, receive a direct message, get a new follower, or when one of your tweets is favorited by another user.

Tweetbot also provides a visual indicator in the timeline when someone favorites one of your tweets. While you can get a banner notification for this, you’ll find that a star icon will appear on your tweet as soon as someone hits the “favorite” button. This behavior can be a bit confusing, however, as this is also the same icon used to indicate that you have favorited a tweet, which led me to believe that Tweetbot was magically favoriting my own tweets without my permission. While I was glad to learn this was a feature, not a bug, some users will probably still find it confusing. There isn’t currently a way to disable that feature, but it’s hardly a deal-breaker. 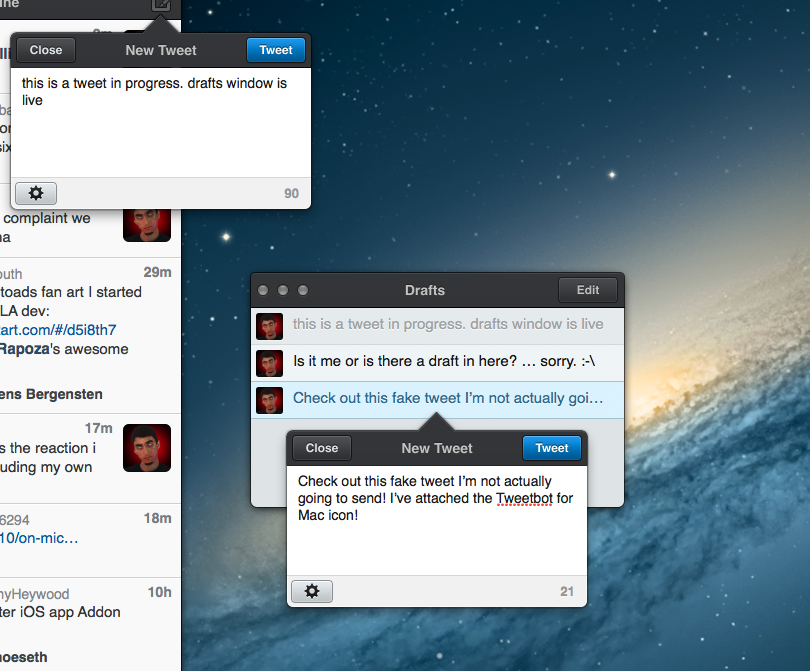 As with any good Twitter client, Tweetbot allows you to actually compose and send tweets. Shocking, I know.

The compose view in Tweetbot consists of an iPad-style popover window that can be “torn away” from the main window and freely repositioned. A button on the popover allows you to manage geotagging, attach an image, or access your list of drafts.

Drafts are incredibly handy for saving tweets you don’t want to send right now, but need to keep for later. Unfortunately, it seems drafts don’t currently keep the media you attached to them before saving, but hopefully this will be addressed in a future update.

Images can be dropped into the compose window to add an attachment, which is faster and much more convenient than using the menu and file browser, in my opinion.

All the Bells and Whistles

Tweetbot for Mac contains a huge number of features and details that would be nearly impossible to cover completely. There are settings for multiple media sharing and link shortening services, options for saving links to Pocket and other read-later services, an integrated photo viewer with full support for animated GIFs, and a variety of interface tweaks that allow you to customize everything just the way you want it.

In case you are wondering why Tweetbot is priced at $20, Tweetbot designer Mark Jardine provided a full explanation on the Tapbots blog:

Because of Twitter’s recent enforcement of token limits, we only have a limited number of tokens available for Tweetbot for Mac. These tokens dictate how many users Tweetbot for Mac can have. The app’s limit is separate from, but much smaller than, the limit for Tweetbot for iOS. Once we use up the tokens granted to us by Twitter, we will no longer be able to sell the app to new users. Tapbots will continue to support Tweetbot for Mac for existing customers at that time.

This limit and our desire to continue to support the app once we sell out is why we’ve priced Tweetbot for Mac a little higher than we’d like. It’s the best thing we can do for the long term viability of the product.