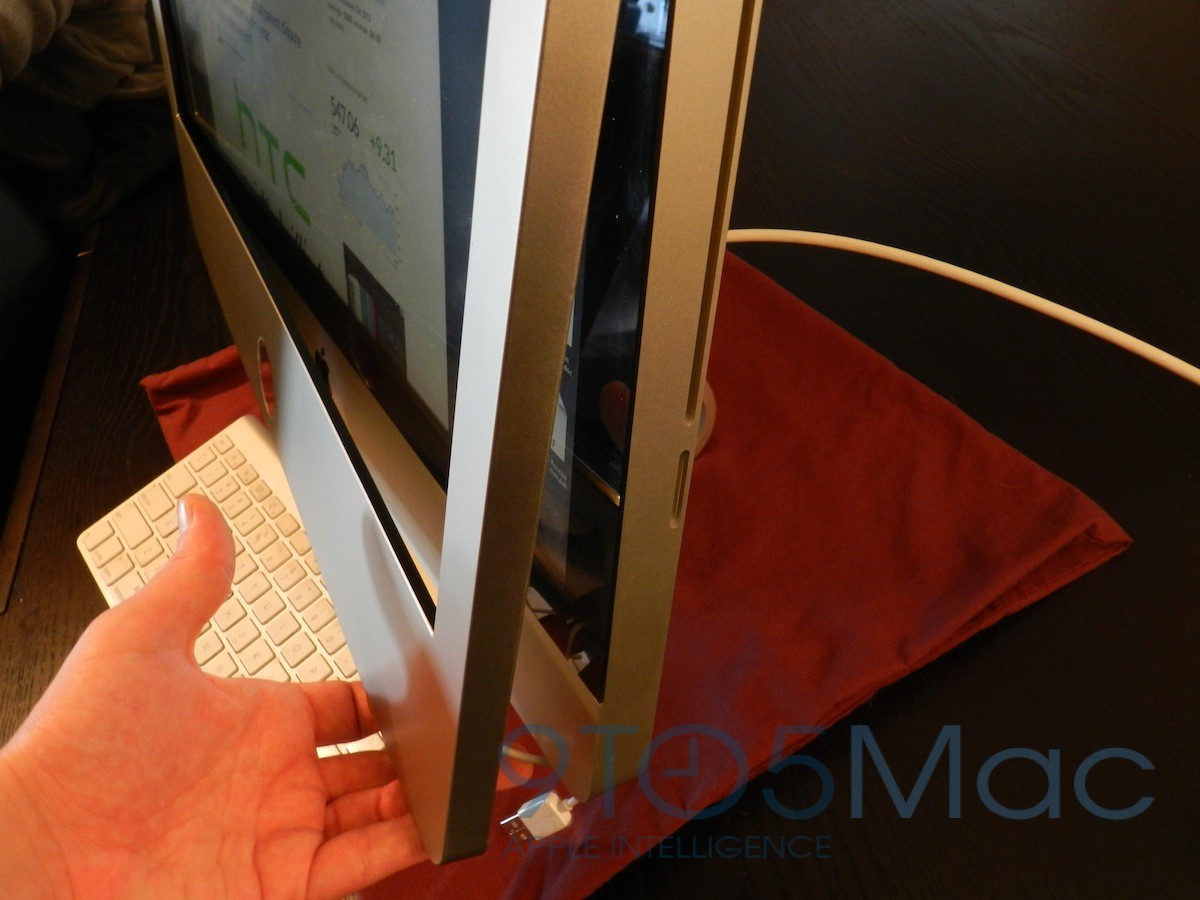 For a few years now PC manufacturers have been attempting to pack a touchscreen into their all-in-one iMac competitors. It’s a feature Steve Jobs made clear back in 2010 that Apple had spent significant time testing on Macs before determining touch was “ergonomically terrible”  on a vertical display. Steve noted “you start to fatigue and after an extended period of time, your arm wants to fall off.”  While that does not mean Apple will never do it (see iPad mini), for now Apple has made its bet on hand gestures staying horizontal on Macs– trackpads in its notebooks, and multi-touch gestures with Magic Mouse and Magic Trackpad for desktops.

Third-party touchscreen solutions for Mac do exist: Troll Touch will install a resistive touch panel on your Mac for no less than $800 and up. However, with that price on top of the cost of the iMac itself… for obvious reasons it has not been an extremely popular solution. We’ve been playing with what appears to be the only affordable product on the market bringing touchscreen like gestures to iMac, the $199 Zorro Macsk from Shenzhen based TMDtouch.

Early reviews of the Zorro Macsk should perhaps be updated, as we’ve been playing with the product following an update at the end of October that the company said vastly improved performance and fixed many of the issues reviewers were experiencing.

The Zorro Macsk doesn’t actually include a touch panel. It’s simply a frame equipped with infrared sensors to track hand gestures performed on your iMac display. In our tests the sensors even detected the gestures when hovering over the glass, making direct contact with the iMac’s display not always necessary. Unlike other third-party touchscreen solutions, like Troll Touch, installation couldn’t be any easier. The frame clips onto your iMac magnetically, while power comes from a USB cord conveniently positioned to plug into the back of the Mac. Installation time: 10 seconds or less.

After plugged in, the Zorro Macsk takes about an additional 15 seconds to configure itself (we also grabbed the firmware update from the company’s website as noted above). Out of the box, single taps worked immediately. I could also hold to pull up the right click menu, two finger to scroll up and down in web pages, and resize and rotate where expected with two fingers. The biggest problem comes from the more complicated three and four finger gestures, most of which I couldn’t get to perform reliably. Also, as you might expect, the smaller buttons such as minimize and new tab in Chrome can be difficult to maneuver.

After configuring mouse and keyboard preferences according to the provided guide, everything feels a bit snappier, but the same problems exist.  Part of that configuration is popping up the onscreen keyboard viewer, which gets you out of sticky situations sometimes, but somewhat defeats the purpose of using gestures in the first place. An included metal stylus with rubber tip will do the same, allowing you to tap the smaller buttons in OS X that often take multiple attempts with your finger.

What Zorro Macsk does do great is provide pretty reliable gestures for certain situations, inside of specific apps. A lot of games actually work quite well, of course those that rely mainly on a single tap, such as Angry Birds, will work the best. Likewise, other apps from basic drawing apps to something more complex like Google Earth performed surprisingly smooth. It’s a shame the same gestures proved frustrating when simply browsing the web. Again, this is more suited to casual, single-tap experiences, and doesn’t do as well in pro apps that require precise input.

Zorro Macsk definitely isn’t going to provide you with an iPad-like touchscreen experience. That being said, from my experience, the functionality isn’t much worse than the touchscreen solutions currently shipping in desktop PCs. This is not going to replace your mouse, and certainly not your keyboard, but rather augment those experiences, allowing you to perform occasional onscreen taps for certain functions.

For home users, Zorro Macsk is probably best for children playing casual games and other basic apps. It’s not going to boost productivity any for every day use, but inside of certain apps, such as Google Earth, it’s actually a much nicer, more intuitive experience than using a mouse. Also, I can imagine business owners taking advantage to create an iMac kiosk of sorts, perhaps only providing access to Google Earth and handful of other apps.

As long as you are not expecting a fluid, touchscreen browsing experience, the Zorro Macsk performs quite well for the price and the two-second installation makes it’s shortcomings a little easier to forget.

The Zorro Macsk is currently only available for 21.5-inch iMacs in handful of colors and also comes with a plastic screen protector and metal stylus. We imagine a 27-inch model is on the way depending on how well this one does, and the model we have is slim enough that it should fit the new iMacs.