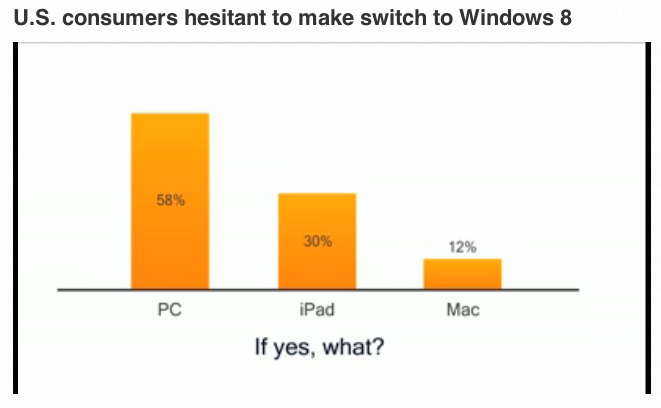 Internet software firm Avast conducted a USAToday survey of Windows users to determine the number of people willing to upgrade to the latest Microsoft operating system, and the findings churned out some surprising responses.

According to USAToday, which noted the survey polled users of Avast’s anti-virus PC software on Oct. 25, the day before Windows 8 launched, nearly half of Windows 7, Windows Vista, and Windows XP users intend to switch to an Apple product rather than upgrade to Windows 8.

“Many households already have multiple PCs, and people are keeping their computers longer,” explained Avast’s Director of Strategy Jonathan Penn. “More people are going to the iPad as their second or third computing device.”

Avast collected over 350,000 poll responses and found only 16 percent of U.S. respondents planned to purchase a new computer. Sixty-eight percent specifically noted they would buy a new Windows 8 model, while 42 percent wanted to purchase an Apple iPad or Mac (30 percent and 12 percent, respectively).

It is worth noting that Avast makes the kind of crapware that is loaded onto PCs involuntarily and is one of the reasons people may switch to Macs.

Get the full report at USAToday.