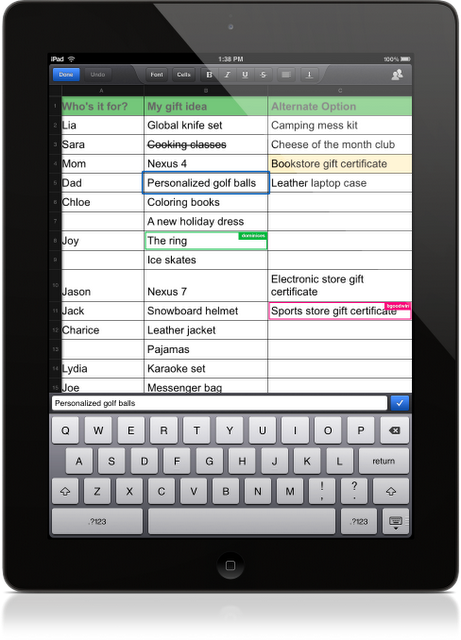 Google just updated both the Google Drive and Chrome apps for iOS.

Google Drive’s most noteworthy new feature is the ability to edit spreadsheets, just like Google Docs. The Drive Team elaborated on the newest update via the official Google Drive blog:

From the Drive app on your iPhone, iPad or Android device, you can create a new spreadsheet or edit an existing one. You can switch fonts, resize columns, sort data, and more. And just like on your computer, you’ll be able to see other people’s edits in real time as they’re made.

The latest version also boasts improved text formatting when pasting, while Android users can exclusively edit text within tables in documents and add a homescreen shortcut to any file in Drive.

The Chrome app also just updated, with version 23.0.1271.91 (yeah, long version number) now live, and the notable tweaks include the ability to open PDFs in other apps, save boarding passes and tickets with Passbook, and enable text-encoding detection in settings. The app also features stability and security improvements and many bug fixes.

As 9to5Mac previously reported, Google makes it easy to have a Google OS-like experience on iOS. It has loaded the App Store with Gmail and Sparrow for mail, Google Voice search for Siri, Drive for cloud, Chrome instead of Safari, Google Books, Google Voice, Latitude, and possibly soon, Google Maps for iOS. That, of course, does not include the handful of Google apps that also replace popular third-party iOS apps, such as: YouTube, Currents, Google+, and Google Shopper.

The refreshed Google Drive app is available on Apple’s App Store, along with Google’s Chrome app for iOS.