Wild Speculation: Why a $2B AMD purchase would be a puzzle piece fit for Apple

Things aren’t looking good for chipmaker AMD…Following another round of layoffs totaling about 15 percent of its employees last month, Reuters reported today that AMD is looking for an investor to sell its Texas campus in order to raise up to $200 million in cash in a multi-year lease back deal. AMD’s cash dropped from $279 million to $1.48 billion in the third quarter, and today the company sits at a market cap of $1.40 billion.

Despite not being the “main option,” with the restructuring and the company’s financial issues, Reuters’ sources claimed an outright sale of the company isn’t out of the question. This isn’t the first time we’ve heard chatter of an AMD takeover. However, with the company sitting at a market cap of $1.40 billion and rumors of Bob Mansfield’s new Technologies group possibly transitioning away from Intel processors, we can’t help but imagine a few things Apple would stand to gain from the purchase…

First, Apple acquiring AMD could mean it finally moves chip production away from Samsung in its mobile devices (and Intel in Macs) as rumors of Apple lessening its dependence on Samsung as a component supplier continue to roll out. AMD is a fabless manufacturing operation—instead contracting its chip-building to Global Foundries and TSMC.

Apple could immediately move from Intel chips in its Macs to similar AMD processors, and, under its roof, Apple could tailor-make the processors to best fit its needs.

Many reports in recent months have brought up old rumors that Apple is planning to make the switch to TSMC for production of processors in the years to come and even begin risking production as early as this month. Today, DigiTimes once again cited industry sources and claimed TSMC would start producing processors for Apple devices in 2013. As pointed out by AllThingsD, when making the case for why Qualcomm might buy AMD, the company has relationships with chip foundries that a company like Apple could certainly benefit from if it ultimately drops Samsung from the picture:

AMD also has strong ties with chip foundries upon which Qualcomm and numerous other so-called “fabless” chip companies rely to build its chips. AMD has historical ties with the world’s second largest foundry, GlobalFoundries. That company is essentially the former manufacturing arm of AMD… AMD also owns a portion of the leading-edge 28-nanometer manufacturing capacity of the world’s largest chip foundry company, Taiwan Semiconductor Manufacturing Corp, a.k.a. TSMC. 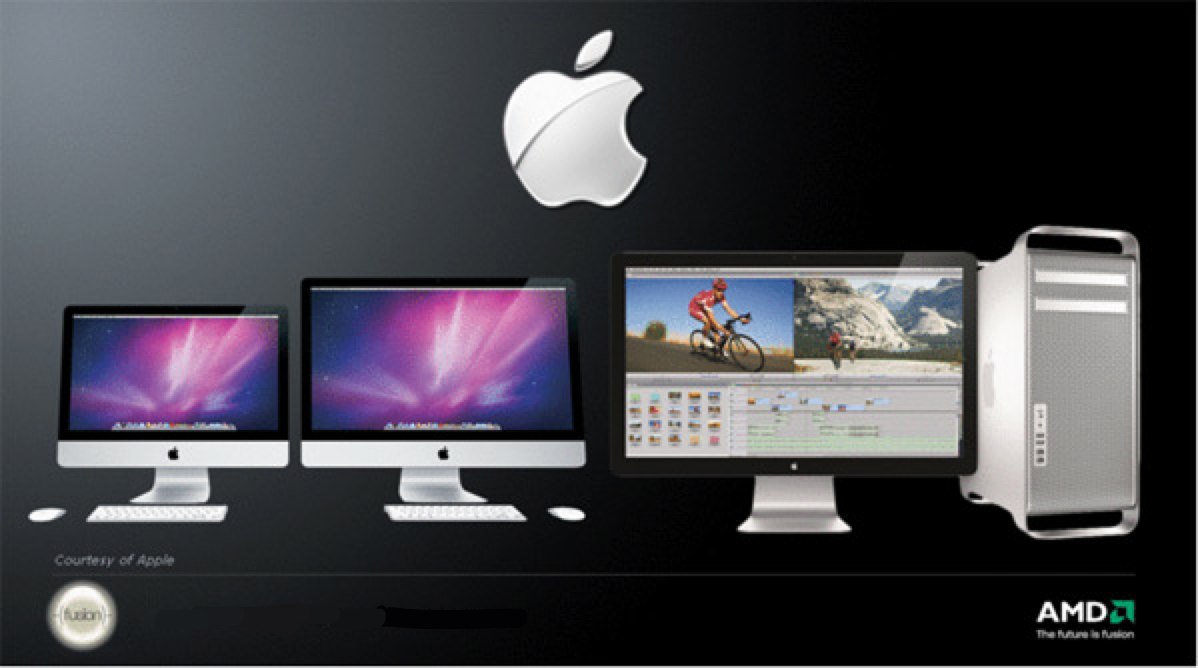 Samsung has made big investments recently in its Austin, Texas plant as the only manufacturer of chips for Apple’s iOS devices, which would seem to imply multi-year agreements are in place. However, AMD’s 58-acre site, currently up for sale, would make a nice home for many of the ‘displaced’ Samsung employees if Apple were to make the move. Apple already has a sprawling Austin campus that does have some chip design units as well as a call center.

Apple would of course gain control of AMD/ATI’s graphics products. While Apple decided to go without AMD GPUs in its latest round of MacBook Pros, instead opting for Nvidia, that doesn’t mean Apple does not have plans for AMD graphics processors in the near future. Yesterday, we noted support for AMD Radeon HD 7000 series GPUs was discovered in the recent 10.8.3 Beta release— indicating Apple has plans for AMD graphics likely in the next round of product releases. In-housing graphics chips could allow it to lessen its dependence on Nvidia—which makes processors for rival Android devices including Google’s Nexus products.

Apple could also gain back its former chief CPU architect Jim Keller, who left for AMD earlier this year, as he is known for his work as A4/A5 designer and K8 lead architect at Apple. Keller currently works under AMD’s CTO and former Senior Vice President of Devices Hardware Engineering at Apple Mark Papermaster. While Apple probably isn’t in a huge hurry to get back Papermaster, CEO Tim Cook hired the guy who was fired after Steve Jobs dealt with antenna-gate.

There is the question of whether Apple would face steep legal hurdles getting government approval on such an acquisition. An acquisition of AMD, if Apple were to not license AMD products to others, would surely create competition concerns in an Intel- and Nvidia-dominated CPU and GPU market. AMD’s existence is largely due to the U.S. government’s requirement that Intel have a competitor in the marketplace for many of the computers it buys.

If Apple took over AMD, it would likely lose interest in providing processors to other companies. That being said, the processor landscape changed dramatically in the years since the iPhone was introduced. ARM processors, made by a variety of vendors, are now often as powerful as Intel chips and could be considered substitutes in some cases.

While the purchase of AMD is still a stretch for Apple, a company that doesn’t like to make big buys, many of the pieces do fit, and, for under $2 billion, the move would hardly make a dent in Apple’s bottom line.