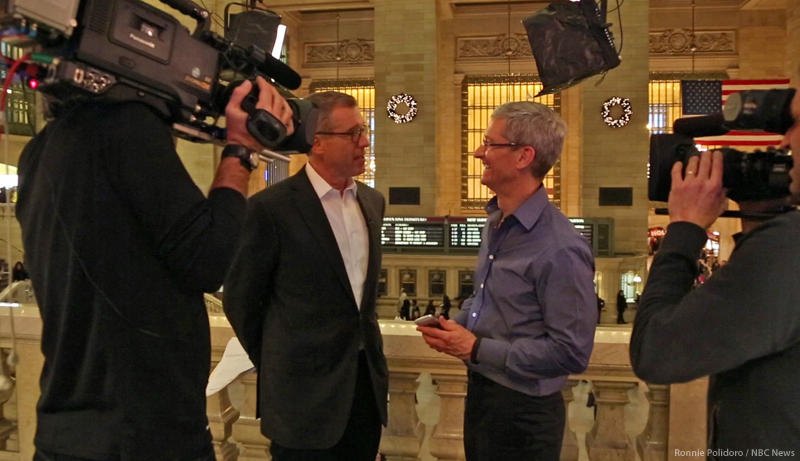 Apple CEO Tim Cook was spotted at the company’s massive Grand Central store this afternoon, giving an interview with NBC anchor Brian Williams. The U.S. network is doing a piece on Apple and shopping at its stores during the holidays. Additionally, Cook was seen checking out the store and showing off the iPhone 5 and iPad mini. Apple’s Grand Central store opened to the public in December 2011, and it is considered a flagship for the company.

The program is set to air Dec. 6—per the tweet, press release, and video embedded below.

His first television appearance since taking over as the CEO of Apple, Tim Cook gives an exclusive interview to Brian Williams from his retail stores in New York City.

Ann Curry sits down with Peter Jackson in New Zealand, at the world premiere of The Hobbit: An Unexpected Journey, premiering in the U.S. on December 14th.

A conversation every American should consider having with their aging parents, Harry Smith goes inside a new kind of end of life medical system and shows us a place that may well be the best place to die.

Members of the media can get more information about NBC Universal and its programming on the NBC Universal Media Village Web site at www.nbcumv.com.
Follow us on Twitter @NBCNewsPR.