Yet another App Store developer has managed to sneak an app with hidden tethering functionality into the App Store. We covered an app that did this in August, and this new application uses a similar process to enable tethering.

The new application is called FlashArmyKnife, and it costs $1.99 on the App Store. For those unfamiliar, these apps with hidden tethering allow you to use your existing iPhone internet data service (with no additional cost) to connect your Mac or PC to the internet. We tested the application with a Mac and it worked as advertised. The developer has not provided a specific tutorial video for PC users, but there is a PC tutorial video for the similar tethering application in our August article. That article also includes more general troubleshooting tips.

Because the application’s tethering functionality is an “easter-egg” – and was hidden from Apple’s app review team – it will likely be removed soon.

Some users have experienced some issues, and making sure that turning off proxies on your computer following setup and entering the correct static IP and socks information (the static HTTP is 6667 and SOCKS is 6668) seems to fix the most common problems.

The video above is the best guide for setting up the tethering app. Directly above is some written assistance with specific characters that will need to be entered.

Update: The tether app has been removed. 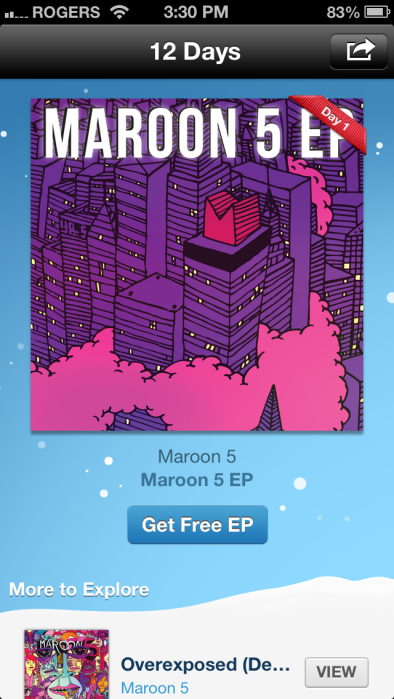 As promised, Apple has provided its first 12 Days of Christmas app gift to users today. The application, as we previously noted, is not supported in the United States, but it is available in many countries internationally. The first gift is Maroon 5 EP.

As we previously covered on 9to5Toys, popular game maker EA is holding a major sale on its App Store games:

EA Games is continuing their tradition of slashing prices of their mobile games during the holiday season.  Most games are available for just 99 cents and include popular titles such as, Monopoly, FIFA 13, Tiger Woods, Dead Space, Tetris, NBA Jam, Bad Company 2 HD and so much more.

Check out the full list at 9to5Toys. Additionally, EA is holding a free app promotion to go along with the games sale.