We’ve long touted the upcoming Broadcom 802.11AC chips as a natural fit for upcoming Macs, as well as long-term solutions to Apple’s TV streaming product(s). 802.11ac allows wireless networks to transfer data at the speed of Gigabit Ethernet (1.3Gbps on paper, but probably a bit below in real-world usage). Today, TheNextWeb says it has information that the next round of Macs will include the Broadcom technology.

Apple has struck a deal with chip maker Broadcom to outfit its new Macs with 802.11ac chips. This will provide a much-needed boost for the standard, which is currently undergoing revisions, as electronics manufacturers look to introduce new consumer products capable of supporting high-speed networks.

Tests on hardware from Netgear, Dlink, Belkin, and others have shown that not only does 802.11ac deliver faster speeds but also increases the distance from which you can connect to an access point. One Amazon Reviewer said this:

I pay for 30 Mbps down and 6 up. With N standard I was getting around 12 down and three up and that was with good hardware. After installing the Netgear AC router and adapters on 5 computers, every computer saw a major increase in speeds. For example, on my primary high end build desktop, as mentioned I was getting about 12 our of 30, now I am measuring 32-35 down and average on 6 different tests 6.4 up. Where I was getting 3. An example of transfer rates on the home network drives I was able to transfer a 50 MB file in .0324 seconds. Thats fast, and its consistent. One of the biggest ways that you lose speed (Transfer speed) is through packet loss. Packet loss on the AC standard measures near 0.

Theoretically, if Apple updates its Macs with this technology, it will also update its Airport Express/Extreme/Time Capsule line of Wireless products to include the new 802.11ac tech. Power sensitive iOS devices may also be lined up for the 802.11ac tech but will likely come in after Macs.

More on the Broadcom chips announced a year ago:

The chips, also called “5G Wi-Fi” by Broadcom, do not correlate with 3G and 4G cellphone networks. The BCM4360, BCM4352, BCM43526, and BCM43516 chips improve Wi-Fi’s range and are significantly more efficient. Perhaps, the most tantalizing aspect is that the 5GHz-based technology has speeds beyond 1Gbps and is currently in the high-end range of consumer Ethernet.

Apple currently uses Broadcom Wi-Fi chips in its Mac line and in its iOS devices, including iPad and iPods.  The latest MacBook Airs have the Broadcom BCM4322 Intensi-fi® Single-Chip 802.11n Wi-Fi Transceiver.  Maybe we will see something a little faster later this year…

The immediate transition from wired to wireless, coupled with growing video utilization, is “putting tremendous stress on legacy 802.11a/b/g/n networks,” according to the company. 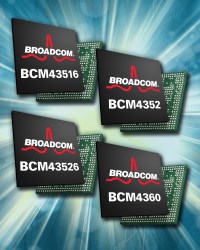 Broadcom plans to showcase its newest advancement at Consumer Electronics Show 2012 through its initial partners: Motorola, Microsoft, Netgear, Belkin, LG, Huawei, Lenovo, and others that will initially implement 802.11ac. After the IEEE certifies the technology, it is ought to become the new standard due to its impressive list of early-adopters.

Apple was the pioneering brand in 802.11 wireless with its Airport release in the late 1990s, which is also bound to be onboard.