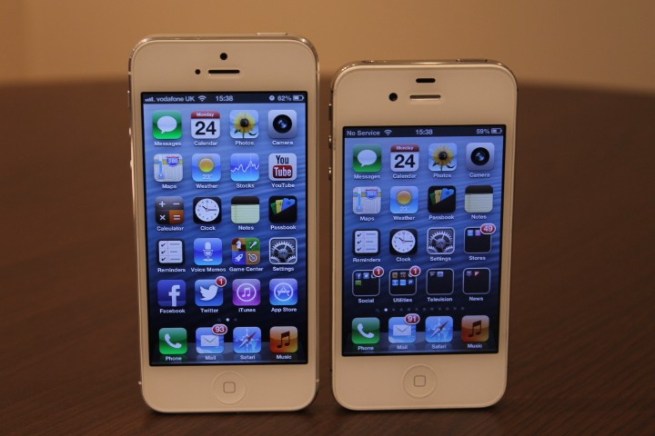 The Commercial Times, with additional information from China Times, seems to claim that Apple is gearing up to release three new iPhone models this year. So far, sounds good. Previous next-generation iPhone-related speculation and reports already point to potential debuts of a smaller, cheaper iPhone, a faster, tweaked iPhone 5, and perhaps a revamped next-generation iPhone.

However, Commercial Times‘ (likely inaccurate) report is calling for a ‘iPhone 5S’ (fine, already rumored), an “iPhone Math” (what?) with a 4.8-inch display, and a third device with a 12-megapixel rear camera. The paper says the first two devices will launch in June, while the higher-end 12-megapixel-camera-packed iPhone will come for the holiday season. The first two iPhones are said to carry 8 megapixel camera sensors (like the iPhone 4S and iPhone 5).

BrightWire has translated some of the more specific claims from the China Times portion of the report. Apparently, shipments will increase for crucial components (like the touchscreen displays and camera systems) in March ahead of a production launch in late April. The reports also offer specific claims regarding who will be producing the components for the next iPhones, as translated by BrightWire:

While the reports do offer strikingly specific claims regarding who will be producing new iPhone parts (and when), the claims as to what Apple’s next smartphones will feature simply do not add up. Besides the claims of an ‘iPhone 5S’ device, a potential future product that has been heavily rumored to be a faster version of the current iPhone 5 design, the claims of other two iPhone models don’t make much sense.

The first other new iPhone that the reports discuss is dubbed the “iPhone Math.” From the start, it seems, based on Apple’s previous product naming schemes, that Apple would absolutely never name a new iPhone the “iPhone Math.” The name, at this point, simply sounds completely illogical. The reports also say that this June “Math” device will feature a 4.8-inch display, an aggressively timed display size increase from the iPhone 5’s 4-inch display.

As we all know, Apple carefully selects its device screen-sizes, choosing only to move the iPhone to a taller, not wider display so it is still easily usable with one-hand. This jump from the 3.5-inch iPhone screen size to 4-inches in the iPhone 5 also required developers to tweak or redesign their App Store apps in order to provide a complete experience for users. If this “iPhone Math” is launching six months from now, that would mean Apple will ask developers to once-again tweak their iPhone apps. That is if the 4.8-inch display is of a different resolution than the 1136 x 640 iPhone 5 – which it would likely have to be to remain in Apple’s definition of “Retina”-class.

That change would come only around 9 months after the last shift. Apple carefully chooses when it will require developers to need to update their apps for new hardware, and the company has only done this on a couple of occasions. All of these being years apart and for substantial reasoning. The early 2012 Retina display third-generation iPad and 2010 iPhone 4, for example.

It also seems very unlikely that, just months after this reported 4.8-inch iPhone, Apple would release yet another hardware update with a 12-megapixel camera.

The rapid release cycle with aggressive shifts in hardware simply does not make sense given Apple’s past iPhone and other product release cycles.

While a June timeframe has already been rumored for an iPhone 5S mid-cycle update device, it seems unlikely that Apple would move off of its new fall iPhone release cycle for a completely new iPhone (such as the mentioned “Math” phone). This is in addition to yet another new device for the Christmas season.

Apple carefully moved most of its iOS device updates to the fall (as exemplified with the respective iPhone 5, new iPod touch, fourth-generation iPad, and iPad mini releases in September, October, and November).

Today’s reports would mean that Apple would, once-again, change-up its iPhone release cycle, something that seems unlikely to happen again so soon. Other reports have pointed to a spring minor iPhone refresh (with a presumed major follow-up a year after the iPhone 5 launch), and this makes a bit more sense to us than today’s reports. Today’s reports would also not fit the timeline from previous reports authored by some seemingly well-connected analysts.

Also pointing to this report being likely untrue is the lack of its discussion of the new budget-iPhone as a part of the three iPhones in Apple’s 2013 product roadmap. A cheaper, and perhaps smaller iPhone model, has been heavily rumored by previously reliable publications such as The Wall Street Journal and Bloomberg.