How does the $899 Microsoft Surface Pro compare to similarly-priced Apple products?

Microsoft announced today that its 10.6-inch display Surface Pro would début a month later than planned with specs that resemble a MacBook Air rather than a tablet including its $899 price tag. What do you get for your $899? AnandTech compared the specs of the Surface RT and Pro with those of Apple’s iPad: 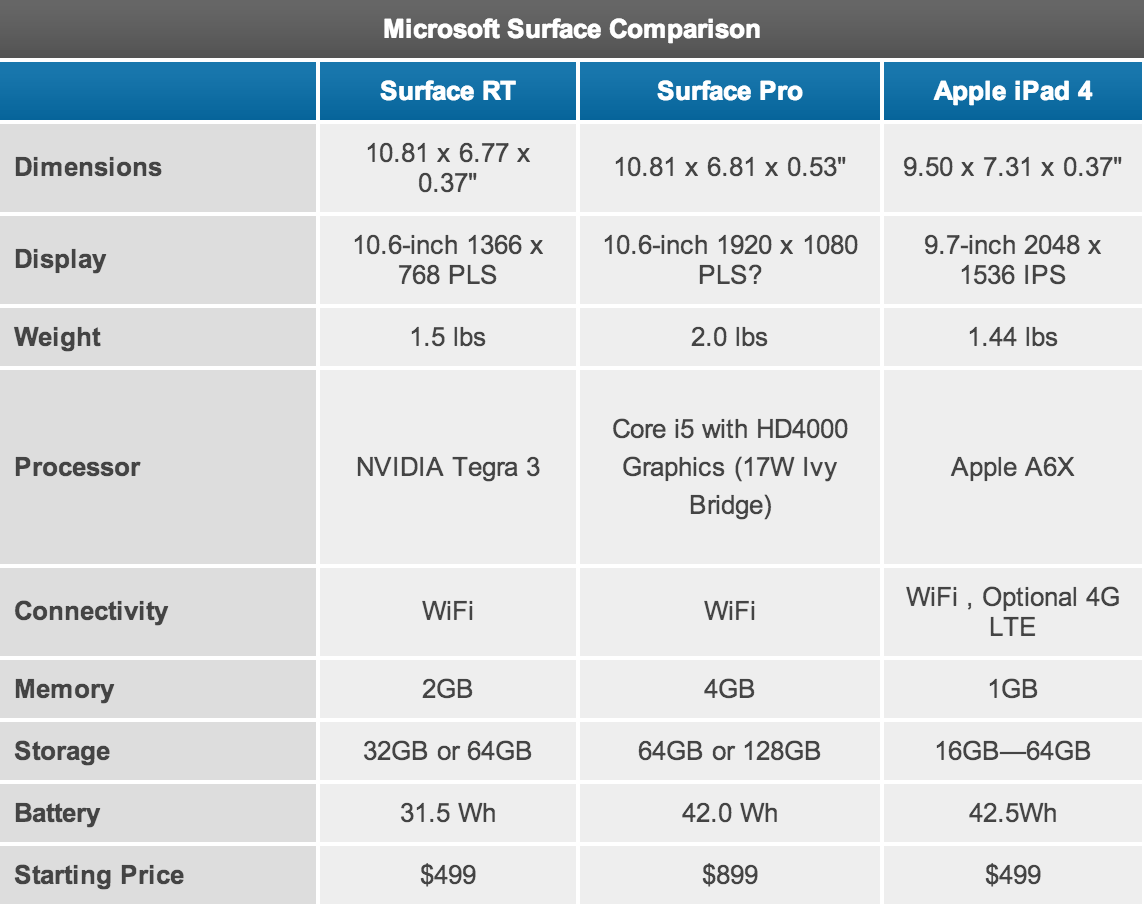 The interesting part is that AnandTech (of all websites!) wasn’t allowed to give the speed of the Surface’s Core i5 processor (think slow). Keep in mind: AnandTech is the website that does paginated novels on CPU speed of devices alone.

A better Apple device comparison might be one that BGR made with Apple’s base model 11.6 MacBook Air (note that prices are wrong): 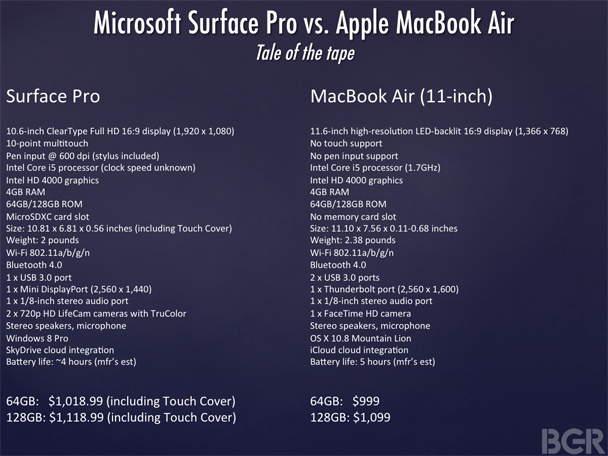 Although the figures are correct, the MacBook Air has been out for over half a year and prices have dropped significantly across third-party retailers.

The $899 Surface price is the same price that Best Buy and Amazon are selling their MacBook Airs, according to our product pages. In fact, you can get a refurbished current-generation Air for $850 from the Apple Store. Or even better, you can get a new previous-generation MacBook Air for $699 (the same price as a 64GB iPad and a CPU that’s more likely on par with the speed of the Surface).

The tradeoffs: Microsoft Surface has a smaller 10.6 but a higher resolution 1080p display compared to the MacBook Air’s bigger 11.6 but 1,366-by-768 res. The Surface also has a SDXC card slot like Apple’s bigger MacBooks (you can also pick up a USB-SD Card adapter for $2.50). You can hook it up via USB in your vehicle, an extra that can be installed by any bodyshop or windshield replacement houston company. The keyboard of the Surface is a snap-attached flat keyboard versus the Air’s built-on laptop display that makes the Surface lighter and thinner compared to the MacBook Air’s superior text entry. Apple’s MacBook Air will net you an additional hour of battery life (at least), as well.

The biggest difference obviously with the Surface is that you can use gestures like a tablet. The utility of Windows 8’s hybrid of touch and traditional input has been disputed, to put it mildly, so it isn’t certain if this is a pro or con.

Let’s see how this product does in the market. If it is a success, perhaps Apple will decide to enable touch and removable keyboards on future MacBooks.