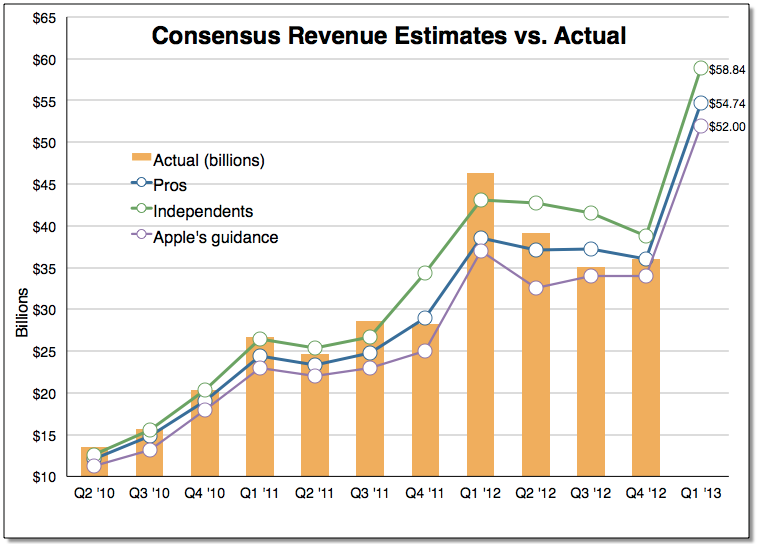 It’s been a perplexing quarter for Apple, especially given its 11-month low earlier this month and lingering questions about how successful the iPad mini actually is, but hopefully all uncertainties will be answered at 5 p.m. today when the company reports its Q1 2013 fiscal earnings.

Numbers are the main points of interest when it comes to quarterly earnings calls. Folks will want to know everything about the iPad mini and iPhone 5, among other products, and whether the competition is becoming a major concern. Wall Street analysts estimated that Apple sold between 47.5 million and 53 million iPhones, according to Reuters, compared to 37 million in the year-ago quarter, while iPad sales likely hit between 23 million and 25 million.

Apple doesn’t differentiate between iPhone models when it comes to its earnings. But it will be interesting to see if the iPad numbers grow significantly, or if the Mini served to cannibalize the larger iPad. The Mini, which launched in November, starts at $329, while the newest iPad starts at $499. In the fourth quarter, Apple sold 14 million iPads, up 26% from last year but below many estimates.

The iPhone 5 is also a hot topic due to recent reports that claimed Apple cut shipments in half. Apple sold 26.9 million iPhones in Q4 2012, but weaker-than-expected-demand allegedly spurred the company to reduce orders. Several analysts previously reported that Apple cut orders for iPhone 5 components, too. However, recent rumors and thinking suggest a mid-cycle iPhone hardware update is the reason for such cuts.

Check out 9to5Mac’s poll on Apple’s stock below.

Either way, we’ll find out more when analysts ask Apple executives during the call to spill the beans. Questions may also arise as to whether Apple believes consumers would go for the much-debated, low-cost iPhone—even though Senior Vice President Phil Schiller already admitted that his company provides the best products for consumers without blindly chasing market share.

Apple will of course also need to give investors something to chew on during the call, as the company’s stock isn’t doing so well these days. It hit an all-time high last September at $705.07, but it dipped below $500 during trading hours on Jan. 14 for the first time since February 2012. Make sure to add your two-cents in the poll below as to where AAPL might end up tomorrow.

Oh, and then there’s Philip Elmer-Dewitt’s quarterly list of analyst predictions. The list includes guesswork from 67 analysts: 28 independent and 39 institutional. The independent consensus notably pegged the earnings per share EPS at $15.11 on revenue of $58.84 billion, while the institutional consensus said $13.45 on $54.74 billion in revenue. Apple earned $8.2 billion in profit on revenue of $36 billion last quarter.

Check out 9to5Mac’s live blog for full coverage of this quarter’s results.