Vine — Make a scene: Today Twitter announced on its blog the launch of Vine, a mobile app it acquired a few months back that allows users to capture and share abbreviated, looping video clips. The free iPhone app is available now in the App Store and offers unlimited, free video uploads, Twitter and Facebook integration, and the developers noted a Twitter account would not be required to sign up.

Today, we’re introducing Vine: a mobile service that lets you capture and share short looping videos. Like Tweets, the brevity of videos on Vine (6 seconds or less) inspires creativity. Now that you can easily capture motion and sound, we look forward to seeing what you create. 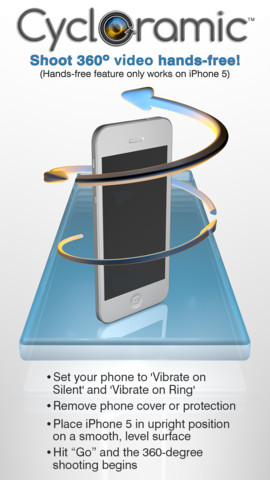 Just place your iPhone in an upright position on a smooth and level surface and press GO. The Phone will automatically rotate 360 degrees while taking multiple pictures, instantaneously stitch them, generate the panoramic picture and finally open it and immerse you in our 3D viewer.