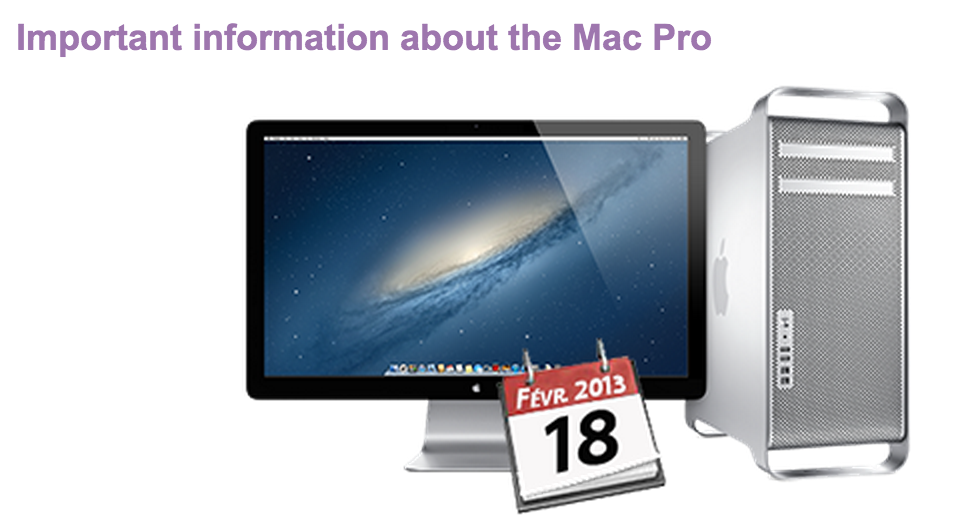 Following the news that Apple is to discontinue its Mac Pro line in Europe due to new regulatory standards, Apple is reportedly prepping a new Mac Pro product for spring 2013. The news comes from Apple reseller France Systemes (via Mac4Ever & Macg.co), an Apple Authorized Reseller and Certified Education Center in France with 17 years in the business, which claimed in a recent newsletter to customers that Apple has confirmed the discontinuation of Mac Pros in the country would only be temporary.

Dear Effective 1 March 2013, Apple will sell more Mac Pro in the countries of the European Union:These materials are not consistent with Amendment 1 regulatory ES 60950-1 second edition that will be applicable 1st March 2013 . Apple take the last orders of Mac Pro configuration card or CTO until February 18, 2013 to guarantee delivery of your Mac Pro before 1 March 2013. However, we believe that the judgment of the Mac Pro is temporary, we Apple informed that a new Mac Pro will be released in spring 2013. We will be sure to submit these products since their introduction.

We discovered last month that Apple would officially stop selling the Mac Pro in Europe on March 1 due to a new standard set to kick in on that date known as “Amendment 1 of regulation IEC 60950-1, Second Edition.” If Apple were to release a new Mac Pro in the spring, it could be an all-new model (something that is definitely a long time coming). If it isn’t Apple’s first major refresh of its Mac Pro line since 2010, Apple could potentially update components of the Mac Pro to meet the new standards and continue selling to the professional market in the European Union.