The Lightning Digital AV Adapter doesn’t do native 1080P out, possibly because it is an AirPlay receiver 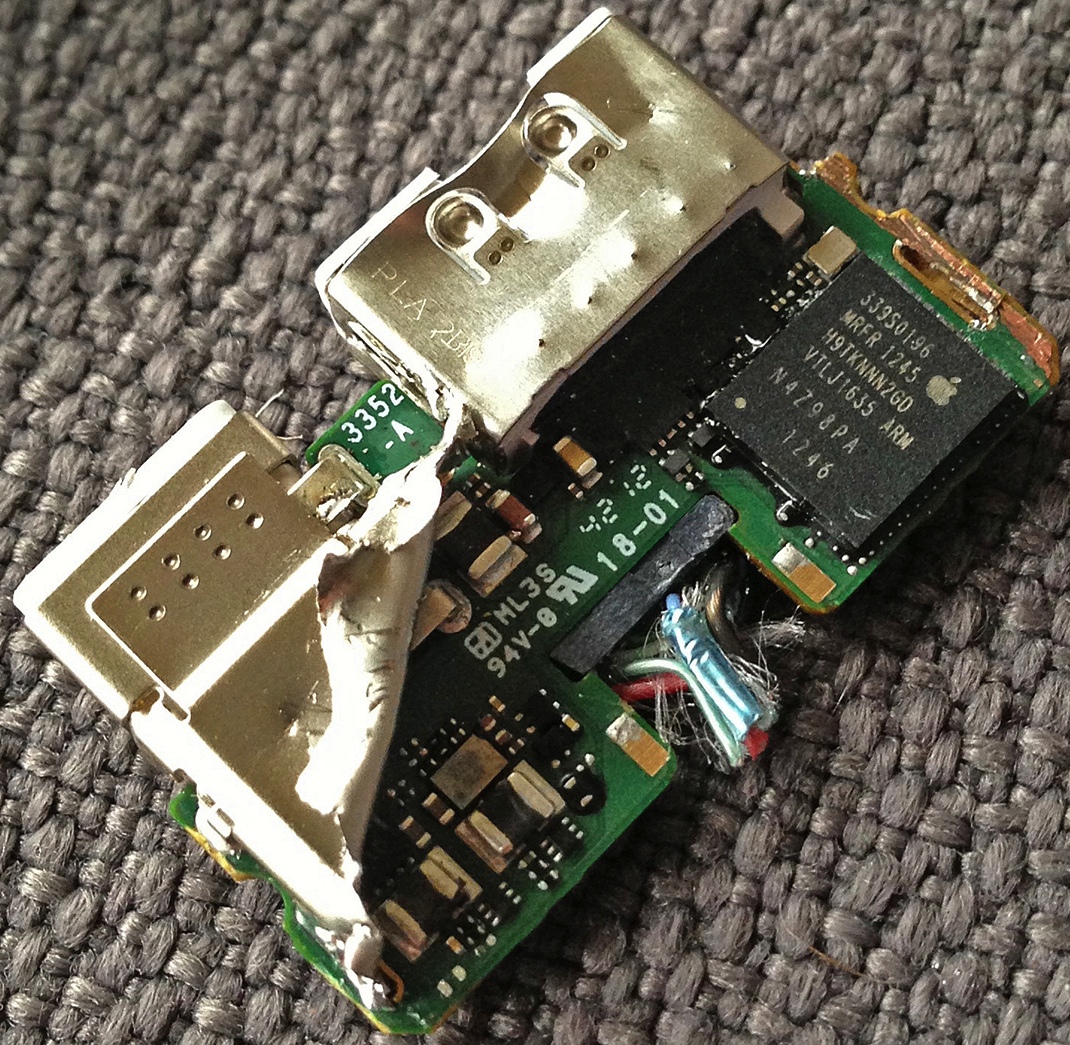 The fine software developers over at Panic are working on some new AV software, and they are investigating Apple’s new-ish Lightning Digital AV Adapter. What they found is that unlike the earlier 30-pin module, the Lightning adapter doesn’t carry a native 1080p signal. In fact, when mirroring, Apple says the optimum resolution is 1,600-by-900, and, when that signal is shown on a 1080p display, it is likely up-converted, showing artifacts consistent with streaming and uncompressing video data

Before it is ripped apart, via Amazon

What’s more interesting is that they split open the cable and found a full ARM processor with 256MB of RAM to process video signals inside the adapter cable. We knew way back in September that the 8-pin adapter wouldn’t carry video natively, but Apple was able to build a cable. How? Panic thinks that it is actually streaming an AirPlay network signal through the cable, and the ARM processor is decoding it.

Why would Apple do this? It’s likely Apple wants to move people to AirPlay wireless streaming to Apple TV, so this is just a stopgap solution. Rather than making a larger Lightning cable, it sacrificed on wired video-out quality and HDMI (And VGA?) cable costs.

Update: Our friends at Braeburn and an anonymous Apple Engineer sent along their takes on the situation below:

Most likely the adapter uses a variation of USB slave mode. The adapter probably gets a command from the iOS device to play a data stream.

If you can zoom in on the lightning plug there should be markings, a,b,c, or d.

My 0.02. AirPlay seems conceivable, but my bet is on the adapter using the iOS device in data mode.

We are hard at work on providing line out /dac on our upcoming Braeburn pro. All apple specs point to the device in some sort of USB host/device configuration.

Airplay is not involved in the operation of this adapter.

It is true that the kernel the adapter SoC boots is based off of XNU, but that’s where the similarities between iOS and the adapter firmware end. The firmware environment doesn’t even run launchd. There’s no shell in the image, there’s no utilities (analogous to what we used to call the “BSD Subsystem” in Mac OS X). It boots straight into a daemon designed to accept incoming data from the host device, decode that data stream, and output it through the A/V connectors. There’s a set of kernel modules that handle the low level data transfer and HDMI output, but that’s about it. I wish I could offer more details then this but I’m posting as AC for a damned good reason.

The reason why this adapter exists is because Lightning is simply not capable of streaming a “raw” HDMI signal across the cable. Lightning is a serial bus. There is no clever wire multiplexing involved. Contrary to the opinions presented in this thread, we didn’t do this to screw the customer. We did this to specifically shift the complexity of the “adapter” bit into the adapter itself, leaving the host hardware free of any concerns in regards to what was hanging off the other end of the Lightning cable. If you wanted to produce a Lightning adapter that offered something like a GPIB port (don’t laugh, I know some guys doing exactly this) on the other end, then the only support you need to implement on the iDevice is in software- not hardware. The GPIB adapter contains all the relevant Lightning -> GPIB circuitry.

It’s vastly the same thing with the HDMI adapter. Lightning doesn’t have anything to do with HDMI at all. Again, it’s just a high speed serial interface. Airplay uses a bunch of hardware h264 encoding technology that we’ve already got access to, so what happens here is that we use the same hardware to encode an output stream on the fly and fire it down the Lightning cable straight into the ARM SoC the guys at Panic discovered. Airplay itself (the network protocol) is NOT involved in this process. The encoded data is transferred as packetized data across the Lightning bus, where it is decoded by the ARM SoC and pushed out over HDMI.

This system essentially allows us to output to any device on the planet, irregardless of the endpoint bus (HDMI, DisplayPort, and any future inventions) by simply producing the relevant adapter that plugs into the Lightning port. Since the iOS device doesn’t care about the hardware hanging off the other end, you don’t need a new iPad or iPhone when a new A/V connector hits the market.

Certain people are aware that the quality could be better and others are working on it. For the time being, the quality was deemed to be suitably acceptable. Given the dynamic nature of the system (and the fact that the firmware is stored in RAM rather then ROM), updates **will** be made available as a part of future iOS updates. When this will happen I can’t say for anonymous reasons, but these concerns haven’t gone unnoticed.