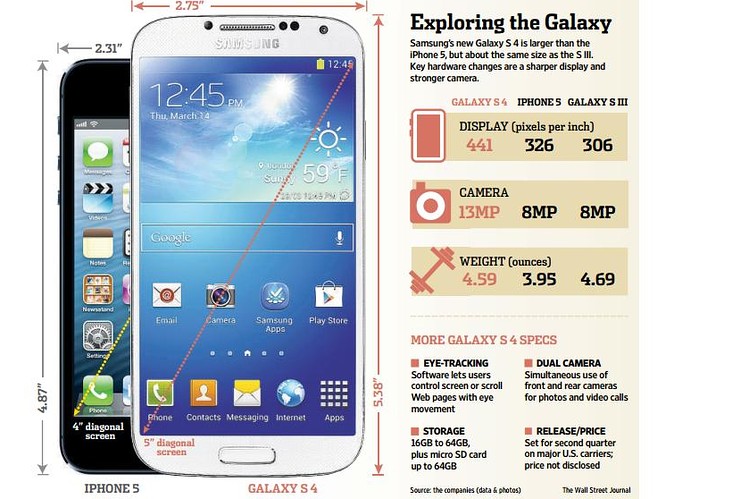 Following Apple’s Phil Schiller’s comments on the eve of the Galaxy S4 launch yesterday, Samsung has now finally unveiled the device at its launch event live in New York. While Schiller was quick to point out that the S4 was rumored to ship with an OS that’s almost a year old, Samsung announced today the S4 would launch with the latest Android 4.2.2 at the end of April on 327 carriers in 155 countries.

The device certainly sports some impressive specs (most of which were already rumored or confirmed in leaks), including a 5-inch Super AMOLED 1,920-by-1,080 display with 441 ppi. The S4 isn’t as thin as the iPhone 5 at 7.9MM thick, but it includes some other enticing specs compared to Apple’s latest offering, such as: a 13 megapixel camera, 2GB of RAM, and up to 64GB onboard storage. WSJ compared the two devices specs for spec here. Samsung put on quite a Broadway-style, theatrical presentation, and you can get the blow-by-blow and photos from the event on 9to5Google here.

“And that extends to the news we are hearing this week that the Samsung Galaxy S4 is being rumored to ship with an OS that is nearly a year old,” he said. “Customers will have to wait to get an update.”

“When you take an Android device out of the box, you have to sign up to nine accounts with different vendors to get the experience iOS comes with,” he said. “They don’t work seamlessly together.”

As noted above, the S4 will come out with Android 2.2.2 (though it is unlikely it will be upgraded to the next OS as it is introduced in May).

Samsung also announced a number of new camera features, the addition of new sensors including temperature and humidity sensors, and new software features exclusive to the S4. Get all the details on 9to5Google.com