Review: Digital Treasures Powerflask — Is it better than booze? 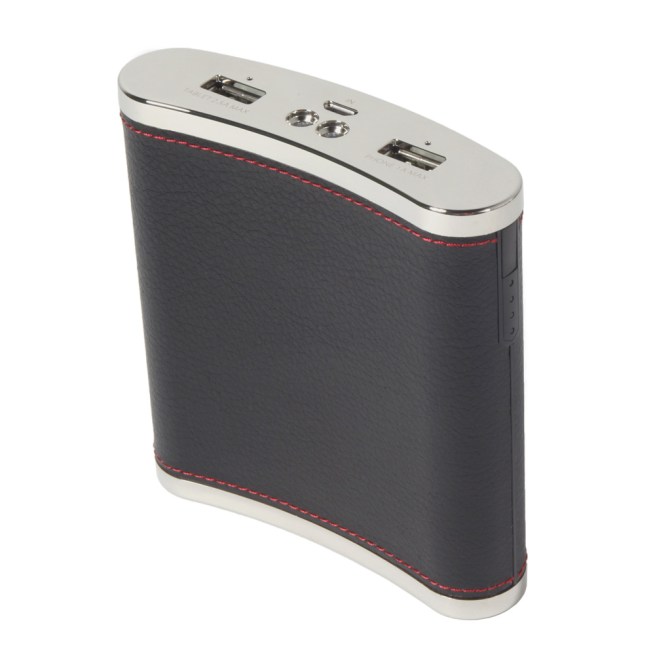 Most technologies have changed beyond all recognition in the last 10 to 20 years. Compare a smartphone from 10 years ago with the latest iPhone, and the difference is night and day. Laptops, TVs, cameras … pretty much any technology you can name has transformed almost beyond recognition. But there’s one technology whose pace of development seems truly glacial: batteries.

I’m not suggesting battery tech hasn’t improved at all, of course, but my smartphone 10 years ago got me through a typical day with a bit to spare, and my iPhone today does pretty much the same (albeit in a significantly smaller package). Those tiny fuel-cell batteries they keep promising us, with smartphone and laptop battery-life measured in weeks and not hours, seem as elusive as ever. Until that glorious day arrives, there will be times when our iPhone or iPad just isn’t going to have enough power to cope with an extra-long day, weekend camping trip, or similar.

There are a couple of different approaches to the problem. The first is a powered case. We previously reviewed the Morphies Juice and Air power sleeves. This is ideal when you know in advance that you’ll need the extra power and don’t mind a bit of extra bulk to achieve it. The second approach is an external battery pack you use to recharge your phone (and other USB-interfaced gadgets) when needed, or when you’re in one location for a while.

This is the approach taken by the Digital Treasures Powerflask, a cute-looking pack that can simultaneously charge an iPad and either one or two iPhones …

The first thing you notice, of course, is that the unit is designed to resemble a hip-flask — and it does this extremely well. Lay it down on end, so the ports on the top aren’t visible, and you’d swear that’s what it was.

It has a smart finish, polished metal at top, and bottom with faux-leather surround and contrasting red stitching. The fake leather is convincing in appearance, though not in feel. It looks like a quality product that wouldn’t look out of place alongside iDevices.

The top of the flask appears to have five ports but actually has three: two standard USB ports for power output (each with a tiny red LED above it that lights up when in use), and a micro-USB port to charge it. What appear to be two round ports are actually LED flashlights. These work but their output is really only adequate for finding a keyhole in a door when returning home in the dark. The flask isn’t really a convenient size for this, so personally I found it a bit of a gimmick.

The two USB ports aren’t identical: one produces a 1A current suitable for a phone, while the other generates 2.5A, making it suitable for either a phone or an iPad. The markings for each port are subtle but clear.

On one side of the flask are four very small and neat blue LEDs used to indicate charge capacity.

The unit is supplied with two cables: one USB to dual micro-USB, enabling you to charge two devices at once from one of the two USB ports, and a second USB to micro-USB cable that doubles as a means of charging the flask and powering a third device from the other port. 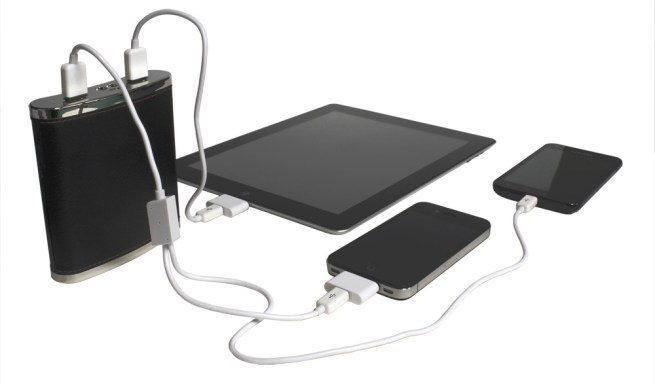 Two micro-USB to Apple 30-pin connectors are included, and they will charge the illustrated two iDevices and a non-Apple phone with a micro-USB socket. You’d need to supply your own micro-USB to Lightning adapters to charge the latest iPhone and iPad.

The flask can be charged from main power or any USB power source, such as a laptop. Plug the micro-USB end of the supplied cable into the top of the flask, and the full-size USB plug on the other end either to a computer or into the supplied mains plug.

The four blue LEDs on the side light up in sequence, remaining solid once the flask is fully charged. The first time you do it, this does take a long time. The instruction leaflet said 11-13 hours, and even on mains power I found it took closer to 18 hours before it was showing full power. We’ll get to the flip side of this in a moment.

The Powerflask is more convenient to carry than its size initially suggests. As an indication of size, it’s about the same height as an iPhone 4, about twice as wide, and about three times as thick. However, it fits comfortably into the rear pocket of a pair of jeans and equally easily into an inside jacket pocket. Women who wear clothing without pockets are likely to find a home for it in all but the smallest of handbags.

There are lies, damn lies, and battery-life claims. My general rule of thumb is to halve the manufacturer claims to get a typical real-life usage figure. Only two devices have ever given me their claimed life: my iPad, and a VIO POV camcorder unit.

The Powerflask claims a capacity of 13,000mAh. Powering the 6,930mAh battery of the iPad 2 and 1,432mAh of the iPhone 4S, it ought to comfortably get through a 12-hour day and leave both devices still fully-charged by the end. I connected both devices, set them not to power off, left them on normal brightness, and then used them normally. I don’t have a landline, using a mix of mobile calls and a pseudo-landline via a Skype-in number, so the iPhone is my main phone even when in the office, and my usage of the phone should be identical whether I’m in or out of the office.

Both devices were indeed still fully charged 12 hours later, and the Powerflask had one LED remaining, suggesting somewhere between 1 percent and 25 percent charge remaining. I could have run the test into a second day to get an exact figure, but there didn’t seem much point: the device is going to get you through the longest of days and easily through a camping weekend when the devices will be used only intermittently.

Note, however, that the iPad 3 and 4 use almost twice the battery power, so you’d get significantly less use from these.

An external battery-pack isn’t the most exciting of devices, but when you need one, you need one. The Powerflask easily copes with the most common usage scenarios with my iPad 2 and iPhone 4S, and it looks the part too.

For an owner of an iPhone 5 and iPad 3 or 4, the higher battery draw of the iPad coupled with the need to provide your own Lightning adapter at a rather frightening $29 each, the unit is probably a bit less appealing but still worth considering.

If you need something a little more burley, check out the HyperJuice.