Apple is beginning a campaign today to win back the video-editing community that abandoned its flagship video-editing software after the release of its controversial Final Cut Pro X. The LA Times reported that following several updates to the software over the last two years to fix some of the criticisms, Apple is launching a number new ads on its website today that feature professionals using Final Cut Pro X. The campaign is apparently timed to lined up with upcoming National Association of Broadcasters convention and aims to win over professional video editors by featuring professionals such as editors at the Globe and Mail newspaper:

Now, after updating the software seven times since its release in 2011, Apple is launching a campaign Thursday aimed at winning back skeptical professional users.

Starting Thursday, the company plans to begin posting three stories on its website, including Liurette’s, aimed at changing the minds of folks like Miller by demonstrating how sophisticated users have embraced Final Cut Pro X. The stories will also feature Tsui Hark, one of the biggest names in Hong Kong cinema, and TV Azteca, which produces thousands of telenovela episodes every year. 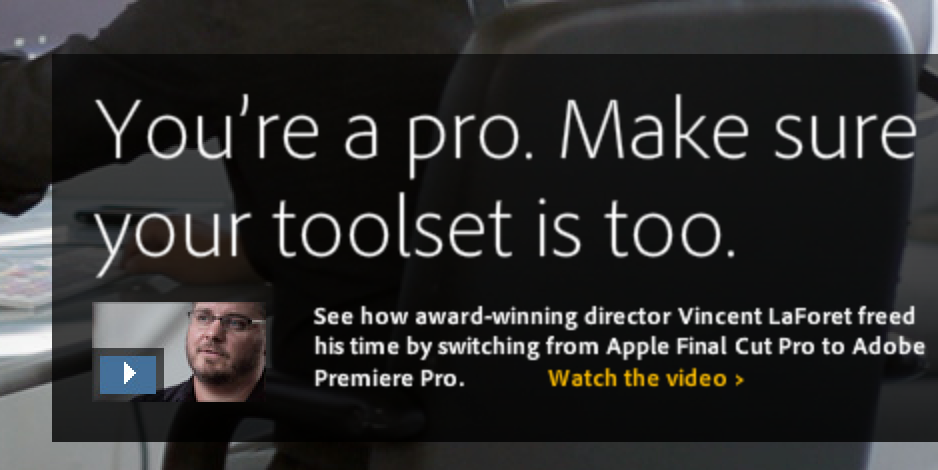 It’s no secret that the professional video editing community was up in arms over Apple’s decision to release what they viewed as a scaled-back, prosumer version of Final Cut Pro with the release of Final Cut Pro X almost two years ago. Despite the Mac App Store dropping the cost of FCP from almost $700 to $299, pro video editors complained Apple had stripped away some of the software’s core features to create a simple experience for the average Mac user and not professionals. It earned FCPX the nickname “iMovie Pro” and criticism in the mainstream media followed by a response from Apple and eventually even refunds of the app to unsatisfied customers.

Apple has updated Final Cut Pro X several times over the years to add some of the features that professionals viewed as missing such as multicam editing, broadcast monitoring, and more.

We’re assuming Apple’s new campaign will show up on the profiles section of its Final Cut Pro X website sometime today. Apple from time to time quietly posts similar business-related profiles for products on its website, but we think it’s notable that today’s campaign will specifically focus on winning back professionals.

Unless Apple is expecting editors to be editing on iMacs … @9to5mac

@9to5mac Too late. Adobe is killing it.