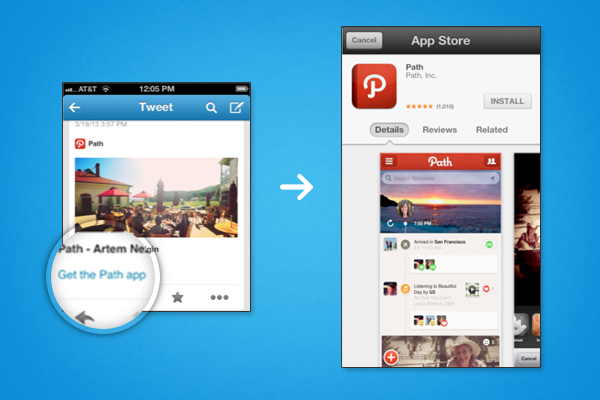 Twitter has updated its iOS app today with new features that allow users to “discover, install and launch” apps from within tweets. The feature won’t support all apps at first, but Twitter explained in a blog post how developers could implement the feature using its newly unveiled “Twitter Cards” app linking features. So, eventually, you’ll likely see more apps offering the ability to install or launch (depending on if you’ve install the app already) directly from a tweet:

One of the most important features in the new Cards is the ability to allow users to download your app (if the user doesn’t already have it installed), or deep-link into your own app (if the app is already installed on the user’s mobile device). The ability to enable app installs and deep-linking is globally available across all Twitter Card types – you’ll just need to add a new set of markup tags as detailed below.

Quicker launch times, performance enhancements, and the ability to tap “Retweeted by” within Tweet details are also included in version 5.5 of the iPhone and iPad app. The updated app even added bug fixes:

Twitter for iPhone now helps you discover, install and launch your favorite apps from Tweets. This update also includes the following improvements: • Faster launch times and general performance upgrades • “Retweeted by” in Tweet detail is now tappable • Fix for reply-to-self in conversations • Fix for bug that prevented undoing retweets in some cases