Morgan Stanley revises Apple estimates (up & down), and adds voice to predictions of digital wallet 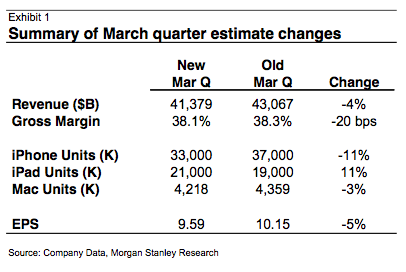 Fortune reports that Morgan Stanley analyst Katy Huberty has taken the unusual step of revising her estimates for the current quarter, predicting that Apple will sell more iPads (up 11 percent), fewer iPhones (down 11 percent) and fewer Macs (down 3 percent).

Analysts adjusting their estimates on the basis of supply-chain data and rumors is nothing new, but it’s an unusual step for Huberty, who generally issues a single forecast the day after the previous quarter’s figures are reported and then sticks with it for the full three months …

The biggest change: Citing “supply chain data points,” she lowered her iPhone estimate by 4 million units (11%) and raised her iPad number by 3 million (also 11%, but in the opposite direction).

Her revised iPad number (21 million) is now one of the highest on the Street and her iPhone estimate (33 million) one of the lowest.

Huberty has also added her voice to the growing number of commentators predicting some kind of true digital wallet product from Apple, beyond the Passbook approach of simply storing and updating electronic coupons. Apple has so far said that it doesn’t consider NFC payments to be a sufficiently mature technology, with few retailers having the infrastructure to support it, but with a growing number of competitor phones supporting it, the question for iPhone is not if but when.