I’ve never been greatly enamoured of the concept of phone cases. You pay all that money for a beautiful design that Jony Ive and his team sweated over for months, then hide it in some butt-ugly plastic case.

I’ve always just used a matte screen-protector (as much to remove reflections as protect the screen from damage) and a Zagg stick-on leather cover for the rear, leaving the phone reasonably well-protected from scratches but without making it look like something bought from Toys-R-Us.

But I was intrigued when I saw that a couple of companies had brought out iPhone cases made from real wood. I love wood as a material, so decided to give the cases a try. On test here are the Zagg ifrogz Natural Wood Case for iPhone 5 and the Miniot iWood for iPhone 3/4/5 …

The ifrogz case is available in a choice of six funky-looking designs: Oasis, Rockwood, Koala, Surf, Zabrano, and Cacao:

I’m very much of the ‘less is more’ school of thought, so opted for the Koala:

This is an absolutely gorgeous-looking dark wood with an interesting grain pattern. At first glance, it’s a horizontal grain blending lighter and darker colours, but a closer look reveals a kind of mottled overlay. It’s a very attractive wood.

They also offer customised inlayed designs in a separate range:

I opted for Oak, as it’s one of my favourite woods, and matched my desk: 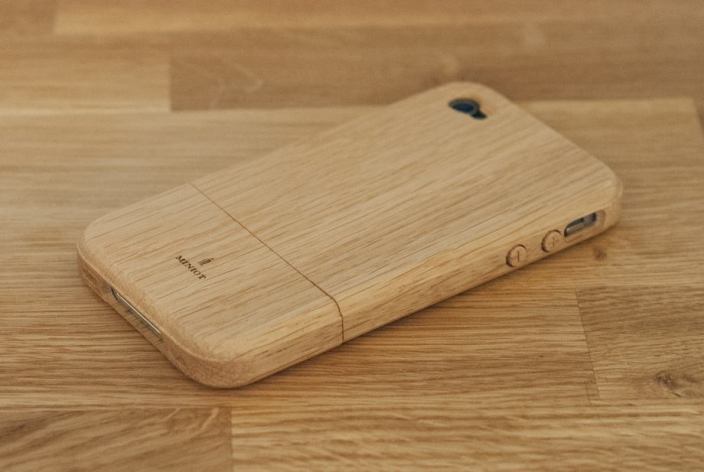 The two cases are completely different beasts. The ifrogz case is described as ‘made of real wood fused with a TPU frame’, which is effectively a wood veneer on the rear of a plastic case. The sides are plastic, and the top and bottom open. The iWood, in contrast, is made from a single piece of solid wood, with no plastic at all. Back, sides, top and bottom are all completely surrounded by the wood, and even the power and volume buttons are covered with real wood ones.

The difference between the two cases is also evident when you handle them. With the ifrogz case, you are holding it by the plastic sides, with the feel of the wood only at the rear. The wood veneer at the rear is beautiful, but overall it still has the look & feel of a plastic case. With the iWood, you are touching nothing but wood, even when operating the buttons.

I have to confess that at this point I was pretty much expecting to chalk it up as no contest: on look & feel alone, the iWood was streets ahead. But this, as I was to discover, was not the end of the story.

The ifrogz case is a simple, slip-on design that you can apply and remove in seconds. It’s thin, with a single cutout in the plastic on the left-hand side for the mute switch and volume buttons.

The iWood case is a thick case enclosed on five sides. It is supplied as two pieces which slide onto either end and then snap together. I wondered how fiddly this might be, but in fact it was extremely easy to do.

The ifrogz case really doesn’t affect usage at all. Power and volume buttons, and the mute switch, are all just as easy to operate as the naked phone. With the slim casing and open bottom, it should fit pretty much any charging dock, and if it doesn’t it’s a matter of seconds to remove. 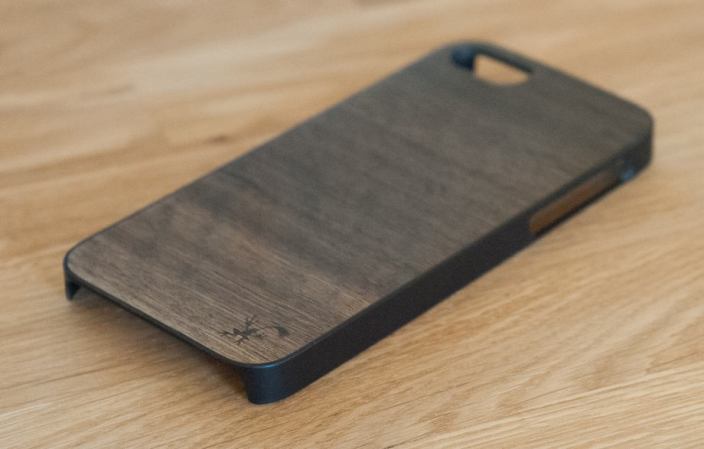 Did I mention that the iWood case is thick? This is easiest to see in the camera cut-out, where Miniot has had to cut four steps into the opening to avoid constricting the view for the lens. The wooden button covers are also not there just for aesthetic reasons: without them, you’d never be able to reach the original buttons.

As an aside, the misalignment you see there is after I tried to remove the case – of which more in a moment …

The thickness of the case creates two issues. First, difficulty in operating the mute switch. I managed this with a little effort initially, but straight after trimming my nails it was quite a challenge!

Second, the phone is now substantially thicker than normal, meaning that it will no longer fit many docks designed for the phone. It just squeezed into my desk dock (in case you’re wondering where the power cable is, that drops down through a hole in the desk), but it didn’t even come close to fitting the Brodit dock in my car. 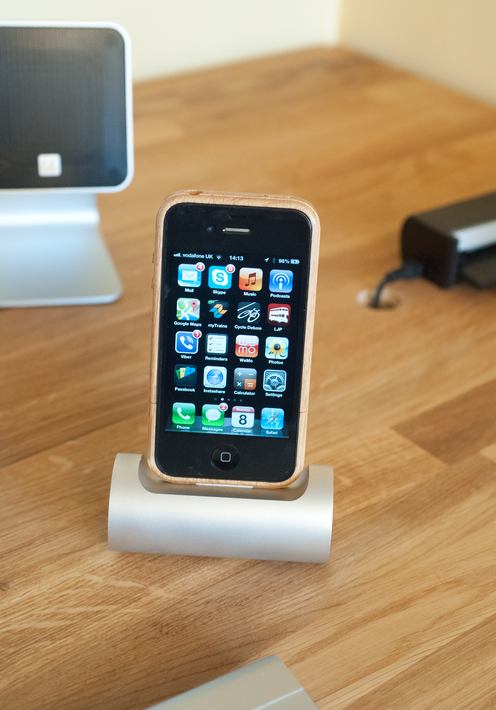 This is why I said earlier that the look & feel are not the end of the story: there is also the question of usability. And this is the weakness of the iWood case: not only will it fail to fit many docks, but this is not a case you can slip on & off like a rubber bumper case: Miniot essentially sees it as fit-and-forget.

When I tried to remove the case, I had no luck. I emailed Miniot for instructions, but still couldn’t do it. After they basically said to keep doing what I was doing but to apply more force, it broke. Miniot did say that this was not a common occurrence and that if this happened to a customer, they would replace the case free of charge.

With some comparative reviews, there is a clear winner, and I had expected that to be the, ah, case here. I was wrong.

For look & feel, not to mention the number of admiring glances the phone got when using it in public, the iWood wins hands-down. The ifrogz case just isn’t in the same league.

But for usability, the iWood case takes a big hit. If you have any docks, look carefully at how much clearance they offer as the phone it the case may very well not fit. You’re unlikely to experience any problems with the ifrogz case, and if you do, you can remove it in a jiffy.

So it all comes down to how you use your phone. If all you do is connect the phone to a power cable, and are happy for the case to effectively be a permanent home for your phone, the iWood is a delight. If you have docks, and sometimes want to liberate the phone from the case, the ifrogz will be the better bet.