Tips: Use little-known gestures to arrange photos and shapes in iOS Pages 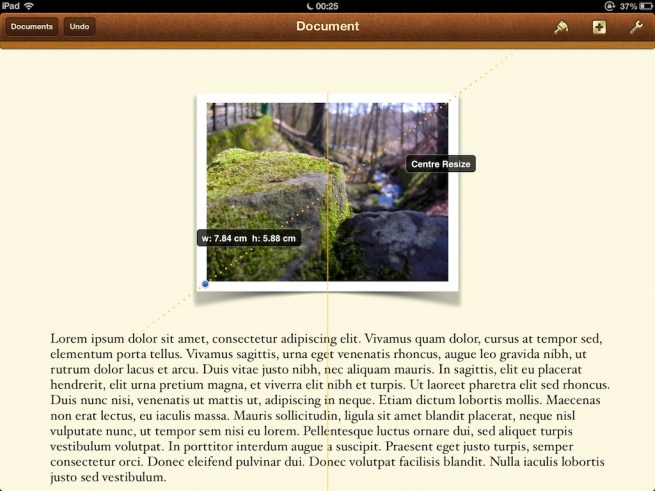 Although the touch-centric UI makes getting to grips with Pages for iOS straightforward, the interface does not appear well-suited to precise positioning of objects, which is necessary in more complicated documents. Luckily, Apple’s iWork suite extends the default iOS set of gestures to provide options for finer-grained control. Learning these more-obscure techniques makes doing ‘real work’ with Pages for iOS an enjoyable experience, rather than an annoyance.

The natural way to position an object with an iPhone or iPad is to drag it, but this method is not really suitable when doing pixel-accurate alignments. With Pages for Mac, you can achieve one-pixel ‘nudges’ with the arrow keys. To do a nudge on a keyboard-less iOS device, you have to use a special two-finger gesture. Start by placing one finger on the photo you want to nudge to select it. Then, swipe in any direction outside of the photo’s bounds with another finger, to move the object in the respective direction. Add on another ‘swiping finger’ to shift by 10 pixels, rather than single pixels, at a time.

The contextual snap-guides are the best way to align items in your document, in most cases. Sometimes, though, you want to move objects in one direction only by a certain amount, irrespective of other elements which means the snap-guides do not appear. This is where ‘locked drags’ are more appropriate. Locked movement can be activated in eight directions; imagine the points of an eight-point compass. For example, to translate diagonally, place two fingers on the screen, one to select the object and another outside of the object’s bounds. Move in the diagonal direction, and Pages will recognize the intent and lock movement to that line.

A hovering popup will appear over the secondary finger to confirm the direction of movement, entitled with either “Vertical”, “Horizontal”, or “Diagonal” to reflect the active direction.

The standard iOS rotation gesture is a two-finger twist. However, this can be fiddly, especially on the iPhone due to its limited screen width, because your fingers will often obscure your vision of the canvas. Pages extends the default system gesture to also enable rotation with just one finger. Start, as normal, with two fingers resting on the object. Begin to twist slightly and then lift one finger, leaving the remaining finger to move in a twisting motion. Even though there is only one finger on the photo or shape, Pages will understand you want to continue rotating. The object will always rotate around its center.

You may want to swap fingers mid-rotation. To do this, simply place the additional finger back onto the screen, and then release the other.

The normal behaviour for Pages’ resize handles is for the photo or shape to scale from the corner that is being dragged, which affects the object’s position on the page. However, there is a way to resize which does not affect the object’s center, keeping page design intact. To do this, place one finger onto the image to select it and use another to drag the resize handle. Pages will indicate that you have entered this mode with a “Center Resize” popup that appears above the first finger.

The instinctive approach to make several objects have the same size is to drag each individually, using the contextual snap guides to know when to release. There is a shortcut, though, which is both faster and more accurate. First, start the process with the image that you want to resize by dragging the blue resize handles. Next, use another finger to tap the target image to match its dimensions. The sizes will instantly snap to equal each other. Finally, to confirm, lift the finger that is interacting with the drag handles before the other one. If you want to cancel, lift the other finger and continue dragging manually.

Many of these same gestures will work in Keynote and Numbers as well. There is a lot of power in the iOS iWork suite; it is unfortunate that so much of its functionality is tucked away and obscure.