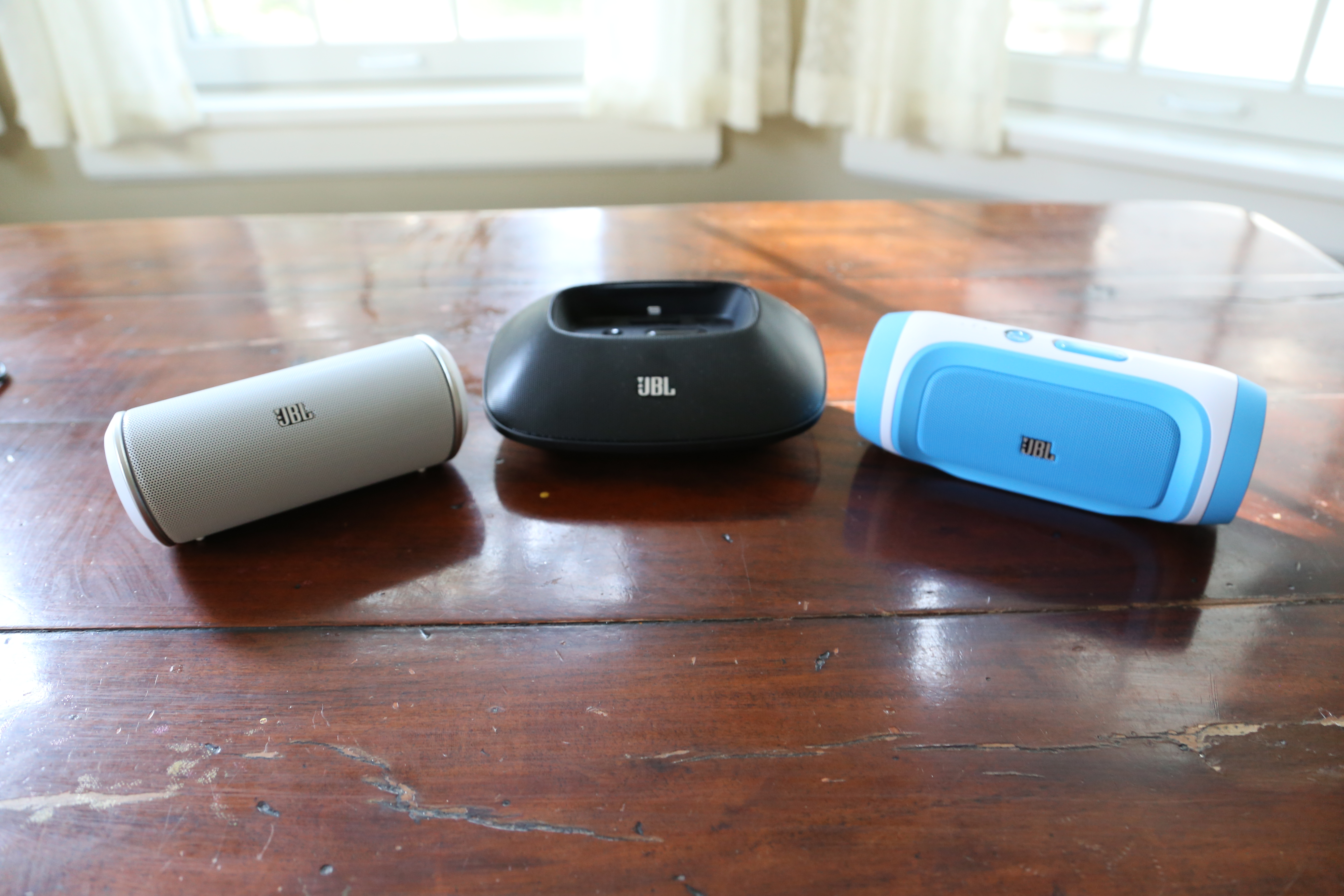 When we did our Best Bluetooth speaker mega-review (TL;DR: Overall Winner, Best Value, Best Sound, Best Portable/Sound, Apps/Updates, more) a few weeks ago, we neglected to test JBL’s very capable ($99 Flip) and $149 Charge; something our commenters immediately questioned. Not even a day after the review went up, JBL sent us a box full of their new speakers to test against our recommendations (sometimes this is a great job!). JBL also sent us the $100 OnBeat Micro Lightning Dock to compare against so it might also be worth asking the question: Should you get a Bluetooth speaker or a Lightning dock speaker?

It should first be noted that JBL/Harman Kardon make great sound equipment and has for a long time. I am a big fan of the Harman Kardon BT over ear and the Harman AKG K391 NC earbud headsets. These are my go-to ear goggles.  So I’m already biased going in.

With the Flip fan comments on the previous Bluetooth speaker roundup, I figured the JBL Flip would blow me away. I’ll just say it right now: it didn’t.  Sound is comparable or maybe slightly better than the $88 Logitech UE Mini Boombox, which is a very good thing. But from here, it goes down hill pretty fast. Instead of USB charging, the Flip takes a proprietary AC adapter that you must carry around with you wherever you go if you want to recharge. What makes that even worse is the battery lasts about half as long as the 8-10 hour long USB-charged Logitech. Like most of the other Bluetooth speakers I reviewed, the Flip allows you to make speakerphone calls and does a great job. It also looks a lot more classy than most of the plastic speakers I reviewed and can be placed flat or on one end.  However, unless this thing is going to sit in one place for 95% of its life, you are better off heading below…

Just when you thought JBL was going to be a pointless flop in the Bluetooth speaker arena, along comes the JBL Charge and totally redeems the company’s efforts. It is an improvement on the Flip in almost every way.  It charges via Micro-USB instead of a proprietary connector (so use your Mac or a spare port in your USB hub or any of the other trillion USB ports around).  The battery is easily double and then some of the Flip.  I left this playing all night and it was still playing on about half volume 12 hours later. That’s more than double the Flip and a few hours longer than even the Logitech. The 6000mA/h battery is so big that JBL gives you a USB port that can keep your other devices charged. With the battery alone, you could charge your iPhone 3-4 times with the aptly-named Charge. It also comes with a nice fabric case to store it in, but it isn’t nearly as nice as the one Beats provides for the Pill.

Oh, and the sound is INCREDIBLE. It blows away the comparably priced Beats Pill in volume and gives you sound close to the much bigger Big Jambox and full-sized Logitech UE Boombox. I put the cylindrical Charge in my bike’s water bottle holder and went for a ride (yeah, I’m that guy).  Even with traffic, lots of wind, and plenty of background noise, I was able to hear music incredibly well — and that was at about 3/4 volume.

The only downside is that it doesn’t have a speakerphone mic for making calls (get the Big Jambox or Mini Boombox for that). Also, while the cylindrical shape is often nice, it is a bit bigger than many of the portable choices out there and can roll away if you are trying to put it on a moving car’s dashboard or boat’s flat surface for instance.

You still can’t go wrong with the Charge; I recommend it highly.

Since I have same-branded products, I thought it would be beneficial to also review a Lightning Dock and compare it to the utility of a portable Bluetooth speaker. JBL’s OnBeat is the latest in the line of iPhone docks from JBL and the first generation with a Lightning connector. Unfortunately, as you can see in the gallery above, iPads and iPad minis  can’t fit onto the JBL dock, so this is strictly for iPhone 5s and new iPod touches (strike one!). JBL has provided an additional USB charging port out the back, as well as an AUX in and out so you can hook up any type of audio device (even a JBL Charge).

As far as sound quality, it is on par with the Flip, above. which is to say on the high end of smaller speakers. In the rare case you need to take the OnBeat away from an AC outlet, it has 4 AAA battery slots underneath to keep the music going for 5 hours. I hope most people will ever use these.

Popping the iPhone 5 on the dock is extremely easy (and with Lightning you can even get crazy and put it on the dock backwards!). It plays perfectly just as it should, and its simple volume and power buttons work as you’d expect. I’m surprised a remote didn’t come with this; it would have been a nice addition.

For me, this is a no-brainer: Bluetooth.

While it is nice to have a dock that charges my iPhone 5 while I’m listening to music, the advantages of Bluetooth far outweigh the negatives.  You can connect any Bluetooth device to Bluetooth speakers (including Androids, Macs, PCs, iPads, etc etc.), you can hold the device while it is playing music, and you can even in the case of some of the devices like the Charge, continue to charge the device. Oh, and Bluetooth devices are portable, making the great outdoors even greater.

As for the three devices above, I can easily recommend any of them, but spending the extra $50 on the Charge is a no-brainer in my book.