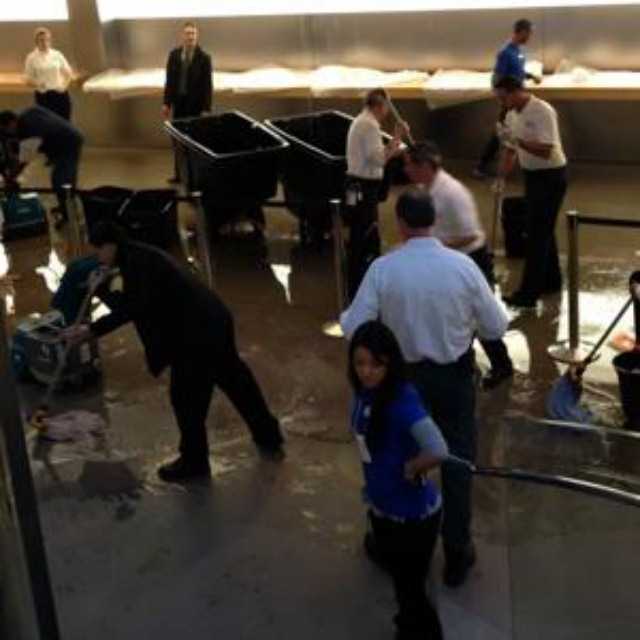 The New York Post reports that the flagship Fifth Avenue Apple Store in Manhattan was flooded following heavy rain in the city this morning due to a leak in the retail store’s roof. The flood apparently began shortly after opening at approximately 8 a.m while around 15 customers were shopping in the store. According to reports from NY Post, employees blamed construction completed on the location last year for the leak:

According to one worker, today’s deluge of water may have been due to problems with construction completed last year on the roof of the store.”It’s because of the construction they did last year on the roof,” the worker said. “They didn’t do it right. There are large flat stones up there [that you walk across as you go into the store]. And with the heavy rain this morning, [the water] came through.”

“I was down there at 5:45am because I had trouble backing up my computer and everyone started yelling,” customer Errol Rappaport, 68, told The Post. “There was a leak then–boom–the whole thing opened up out of the ceiling. Then everyone started scrambling, moving tables…It didn’t look like there were any electrical issues otherwise they would have evacuated the store.”

Although the majority of the water was removed from the store by 10 am, the location apparently remained open to customers the entire time with just the west portion of the store blocked off and one table with iPad display units covered in plastic.