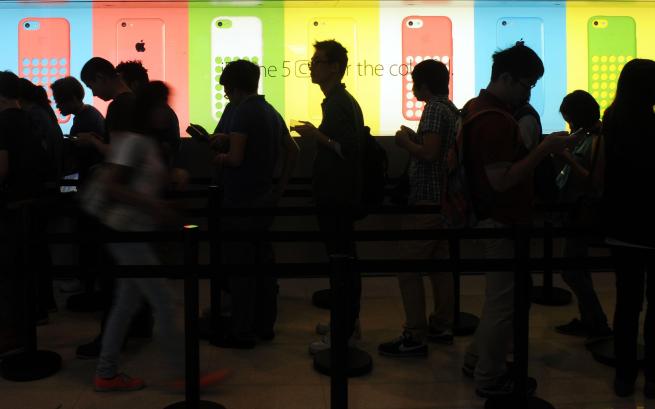 As planned, Apple today announced its financial results for Q4 2013. This is a quarter highlighted by iPhone 5s and iPhone 5c sales and is the quarter preceding the launches of several new Macs and the new iPads:

“We’re pleased to report a strong finish to an amazing year with record fourth quarter revenue, including sales of almost 34 million iPhones”

Apple’s Board of Directors has declared a cash dividend of $3.05 per share of the Company’s common stock. The dividend is payable on November 14, 2013, to shareholders of record as of the close of business on November 11, 2013.

“We’re pleased to report a strong finish to an amazing year with record fourth quarter revenue, including sales of almost 34 million iPhones,” said Tim Cook, Apple’s CEO. “We’re excited to go into the holidays with our new iPhone 5c and iPhone 5s, iOS 7, the new iPad mini with Retina Display and the incredibly thin and light iPad Air, new MacBook Pros, the radical new Mac Pro, OS X Mavericks and the next generation iWork and iLife apps for OS X and iOS.”

“We generated $9.9 billion in cash flow from operations and returned an additional $7.8 billion in cash to shareholders through dividends and share repurchases during the September quarter, bringing cumulative payments under our capital return program to $36 billion,” said Peter Oppenheimer, Apple’s CFO.

Apple reported revenues of $37.5 billion, which is slightly better than Apple’s estimates of between $34 billion and $37 billion. This number compares to $36 billion in revenue in the year-ago, Q4 2012 quarter.

As for individual product lines, Apple sold 33.8 million iPhones, 14.1 million iPads, just under 3.5m iPods, and 4.6 million Macs in the quarter. As for next quarter, the holiday quarter with more days of new iPhone sales, the launches of the new iPad Air and iPad mini with Retina display, and new Macs, Apple is providing revenue guidance of between $55 billion and $58 billion.

Apple is providing the following guidance for its fiscal 2014 first quarter:

• operating expenses between $4.4 billion and $4.5 billion

Apple will be holding a conference call to discuss the earnings and take questions at 5PM EST. We’ll be covering that with a live blog in a separate post.