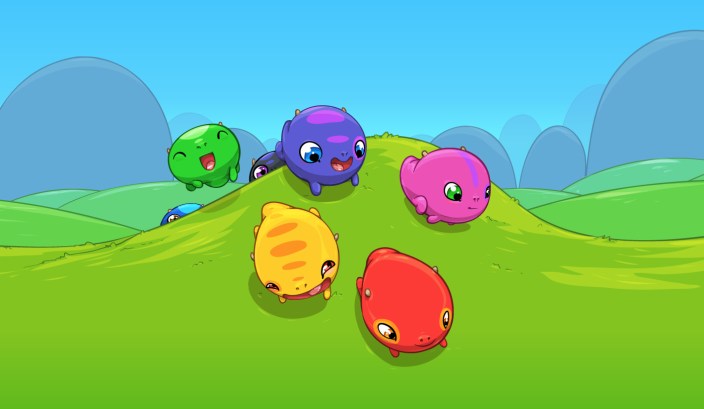 The 90s brought with it a plethora of culture and fun (myself included) from breakthrough Nintendo handheld video games to pop music and weird boy bands (like Britney Spears and N*SYNC). We recently witnessed N*SYNC reunite, but something else from the 90s needed modernizing: Tamagotchi, the digital pet you fed and loved as a kid.

That’s where Hatch steps in… err, hatches… right on your iPhone!

In a collaborative effort between Impending and Realmac Software, who last teamed up to deliver Clear, the two studios deliver on what is an absolutely adorable and lovable game for the iPhone. Check out my complete hands-on review of the long-anticipated Hatch (and lots of entertaining photos) below:

Hatch opens up with an incredibly well produced theatrical trailer (I’m talking intro to OS X Snow Leopard video good) and takes place in a cartoon forest where you care for your pet Fugu.

You’re initially asked your favorite color, my favorite option being space gray (clearly a shoutout to the iOS device color that debuted with the iPhone 5s), and to name the Fugu that hatches out of the egg you’re given. These decisions are permanent so choose carefully!

Most of the gameplay is spent feeding and entertaining your pet Fugu.

The menu originates from the surrounding trees and consists of apples, oranges (or tomatoes?), grapes, and starfruit, the latter of which is actually a valuable currency (more on that later).

You can stow away extra fruit in your backpack or donate it for acorns (also a currency) during the day or for affection during the night.

You can show your Fugu love in a number of ways including poking, petting, and squeezing.

Do them all well and your Fugu will dance with joy and the forest will almost always reward you with the valuable starfruit.

Hatch also knows when your Music app is active and so does your Fugu, as seen above (best experienced with sound enabled).

Progress is measured in trust that is gained through experience and time. While the immediate goal is to care for your Fugu and create a purple ring of flowers around him or her, the long term goal is to reach 100 trust points and acquire more accessories for your Fugu.

Accessories are traded for starfruit and acorns at the adjacent store in the game, and items include bags with larger space for containing fruit as well as decorative rugs (my favorite of which looks like a Clear task list) and even a camera. There are a number of strategies to advance you through the game quicker, but I don’t want to spoil everything in the review!

The camera, which is acquired later in the game, allows you to capture and share photos with your photobombing Fugu making cameos.

Throughout the game you also collect various stickers of your Fugu which can be shared with your friends. These stickers are consumable so choose carefully how you spend them!

Truth be told, there is a way to hold on to your stickers permanently. Simply share with over Messages and copy and paste it elsewhere outside of the app. Just don’t tell anyone!

Facebook Messenger also supports Hatch stickers, although these are different from the stickers in the game. Be sure to check them out while you’re at it.

Design wise, the entire app is drawn out and animated very well. Hatch’s icon features a yellow Fugu which fits in rather well on iOS 7.

Unlike the Tamagotchi we knew and loved in the late 90s/early 2000s, Hatch is designed on top of the most modern of technologies: iOS.

Aside from the convenience of always having your Fugu with you wherever you take your iPhone, Hatch is equipped with its own parallax-driven environment just like your iOS 7 home screen (see example below).

This effectively helps bring the forest to life by creating a more fluid and constant sense of animation despite the largely static screen. Very well done.

Hatch also takes advantage of Location Services, allowing the game environment to change between night and day based on your area sunrise and sunset. 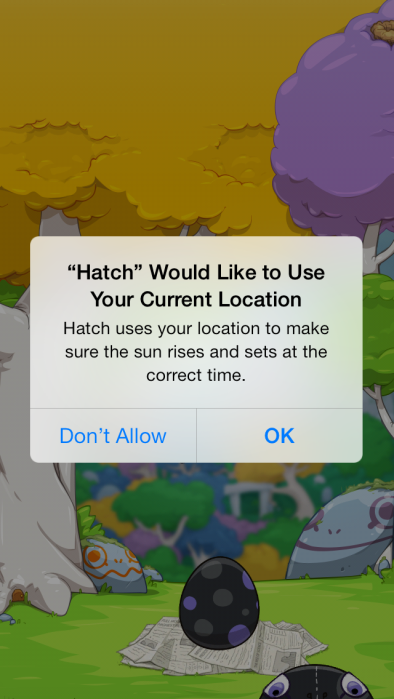 This of course requires your permission and can later be managed in the Privacy section of the Settings app.

Hatch also uses Push Notifications to remind you that there is a living, breathing Fugu on your iPhone.

“Your pet could use its frown turned upside down,” prompted one message. This comes with its own unique and playful tone like any polished app should, so you won’t confuse the notification with other buzzing apps. 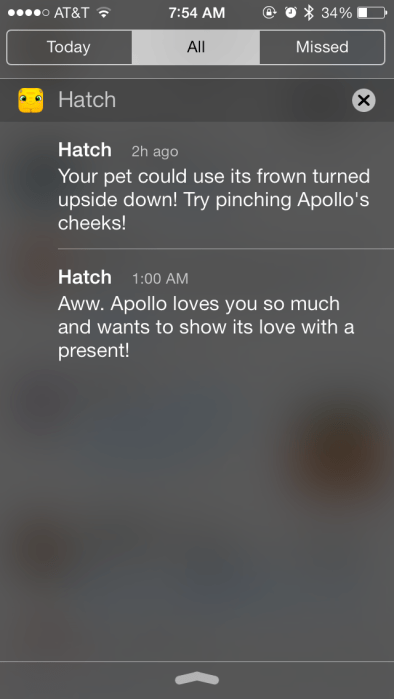 While the push notifications are useful and make the game more interactive when you’re not actually in the app, they do cross a tolerance threshold in version 1.0 by not respecting normal sleeping hours.

You can avoid this by toggling or scheduling Do Not Disturb or disabling push notifications for the app in the Notification Center section of the Settings app.

Ultimately, I find that the notifications add enough value that Do Not Disturb is my preferred solution, but would like to see a future version of Hatch consider the hour of the day in the same way it does for sunrise and sunset to avoid the risk of less-savvy users deleting the game altogether.

Being that it is a game, Hatch taps into Game Center, assuming you are signed in to the service.

Primarily, this allows your Fugu to send and receive gifts with your Game Center friends (best use of Game Center since Letterpress!) and their Fugu. From my experience, this occurs automatically and randomly, and what’s contained in such gifts is just as random.

If a friend sends you poop in a box, don’t take it personally. The contents can range from acorns or coveted starfruit to apples (which are plentiful) or… well… poop in a box, and there’s no interface for controlling what is sent and when. Just relax and roll the dice! 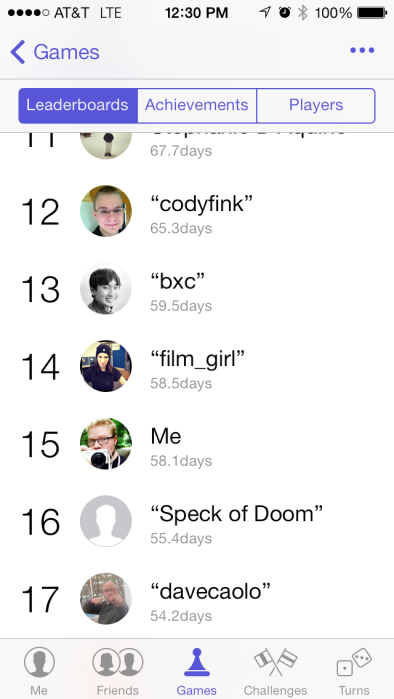 The leaderboard ranks you in order of days, which I believe is measured in part by gameplay duration, so the more the better. I found myself consistently behind Mashable’s Christina Warren, but did manage to squeak ahead a few times so the opportunity for competitive Hatching is there.

Hatch + Game Center achievements and challenges in version 1.0 are limited to different intervals of days alive, but that can create an added sense of urgency to keep your Fugu alive (as if actually keeping your little buddy alive wasn’t enough).

I’m told that neglecting your Fugu after a couple of days results in his or her disappearance with a possible recovery minus a great deal of trust points, but I didn’t have the heart to test this aspect of the game. Spend more than a few days away from your Fugu and expect to start your journey over… at least I think. 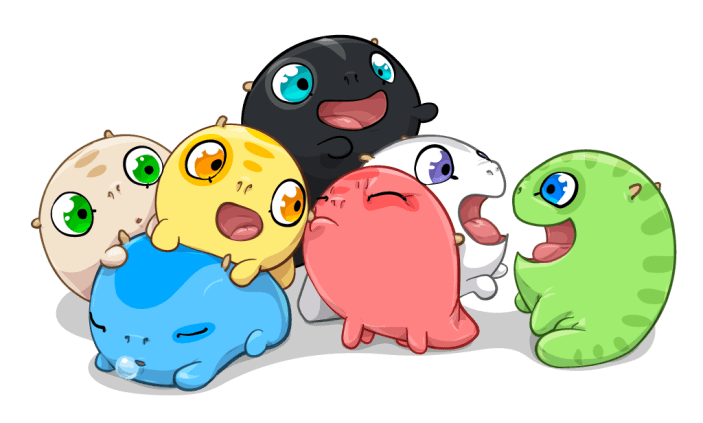 Hatch is also privy to when you charge your device in a clever way. Connect your iPhone to its power source and your Fugu will react be entering a deep, restful trance. Leave you Fugu in this condition before calling it a night for best results.

While this behavior is quite clever, it does come at a cost: you can’t interact with your Fugu while charging your device. Overall, the game is very good on battery life even through extensive play, unlike most other games, but this could be approached differently in future updates.

To Buy or Not To Buy?

So is Hatch worth the two bucks? Consider that a Tamagotchi costs 10 times that much and still looks like it crawled out of a time capsule from 1999. Absolutely.

But for whom is Hatch intended? Potentially anyone with a heart and an iPhone, but for me it’s appeal is in picking up a light-hearted memory from my preteen years.

Sure, Hatch requires a little attention once a day, but I found it rewarding enough to entertain at least a few times throughout the day (severe understatement; I got addicted). It’s certainly a well-done move to bring the Tamagotchi experience to the iPhone and will continue to grow with future updates supporting Hatch-themed iPhone wallpapers and in-game environments to unlock.

In terms of compatibility, Hatch supports iOS 6.1.3 or later on iPhone and iPod touch.

I recommend giving Hatch a go and adopting your own Fugu today for the small fee of $1.99 on the App Store. I think you will be glad you did.