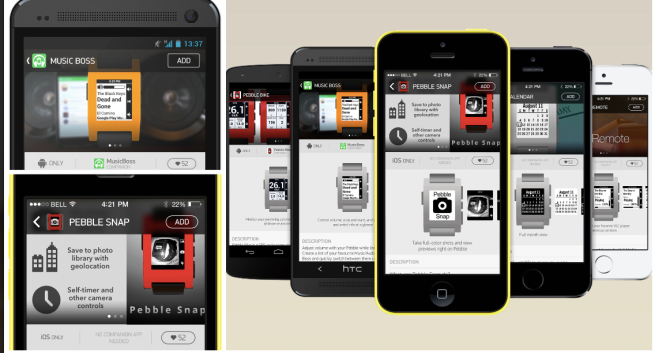 There was little question at some point, somewhere in their roadmap Pebble’s smartwatch was going to get a dedicated appstore. That day has arrived as a new company blog post indicates the new developer portal is now open. The app store will launch to the public in 2014 and be the “first-of-its-kind wearable application directory.”

For all you iPhone/Pebble owners, this means all the watch faces and apps you know and love for your Pebble smartwatch will all be found in one, dedicated app store. That sounds good right? Combine the app store with unannounced features coming with the Pebble SDK 2.0 and rumored Google/Apple smartwatches some have low-cost competition. If you’ve yet to buy a Pebble you can grab it on sale for as low as $90 right now.

Of course, there’s always the chance that Pebble will be considered a relic if/when Apple announces their fabled iWatch that immediately jumps to the top of every kids wish list.

Saddle up Pebble devs: the Pebble appstore is coming soon

Today, we are proud to announce exciting news to our developer community: the Pebble Developer Portal is now open! Pebble app developers can now upload their Pebble apps for distribution in the upcoming Pebble appstore. When it launches in early 2014, the Pebble appstore will be a first-of-its-kind wearable tech application directory—giving Pebble users a one-stop-shop for searching, browsing, and installing Pebble watch faces and apps directly from the iOS or Android Pebble smartphone app.

The introduction of SDK 2.0 included four major new APIs—Javascript, Accelerometer, Data Logging, and Persistent Storage—and the response has been phenomenal. We know developers have excitedly anticipated submitting their SDK 2.0 Pebble apps to the Pebble app store.

The time is now.

For full details, visit the Pebble app store announcement on our Developer Blog »