Video: Connect your iPad to the Internet via Ethernet cable with this easy hack 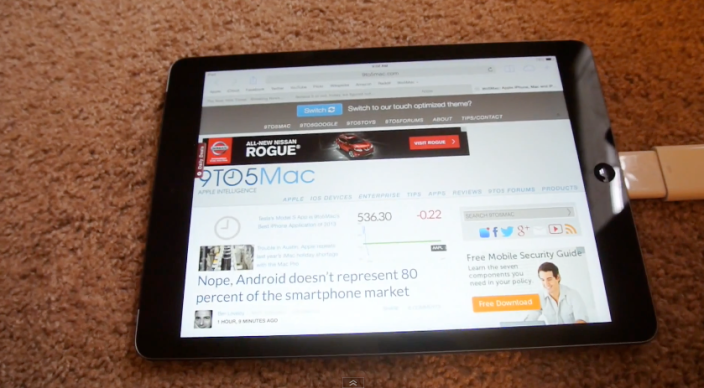 iPad connected to the Internet via Ethernet only

After seeing an eager Redditor discuss their setup for deploying iPads online with just an Ethernet connection, I was curious myself to see if I could get my iPad Air to be wireless-less as well.

It’s obviously not an ideal way to use a tablet in 2014, as it’s probably easier and cheaper to travel with an inexpensive router than the equipment required to get your iPad wired in. But if you have the equipment lying around or just want to experience the proof-of-concept for yourself, it’s certainly a strange thing to witness.

Check below for the setup I used as well as my video experience.

Overall, it’s really not a reliable way to connect to the Internet (and that’s without considering the inconvenience and potential expense) because it just doesn’t work 100% of the time. Simply put, you can’t just unplug it and plug it back in and expect it to work. It’s quite apparent that iOS isn’t designed to entertain this experience.

Here’s what connecting an iPad to Ethernet requires:

–Router (I used the latest AirPort Extreme in my video)

-Internet connection (but you also already knew that, right?)

Connect your equipment in that order if you should be good to go. You will want to either put your iPad in Airplane Mode or manually disable wifi and cellular data before you can really try the proof-of-concept.

In my experience, it would only work if your iPad gave you a warning the it did not recognize or support the USB to Ethernet adapter. On the first attempt, the warning prompted as soon as I plugged it in, but after unplugging and replugging it back it, the iPad did not recognize the connection. Rebooting the iPad solved the problem, but this just speaks to the overall wonkiness of such a setup.

Performance wise, my network speed was actually right on par with what my ISP advertises. Moving back to wifi lost about 10 Mbps and 1/3 of the already low upload, but this certainly isn’t a practical setup in the least.

And without further ado, my hands-on experience with connecting my iPad Air to the Internet via Ethernet only: