Stealing €70,000 of Apple products out of the back of a truck…at speed on a German highway 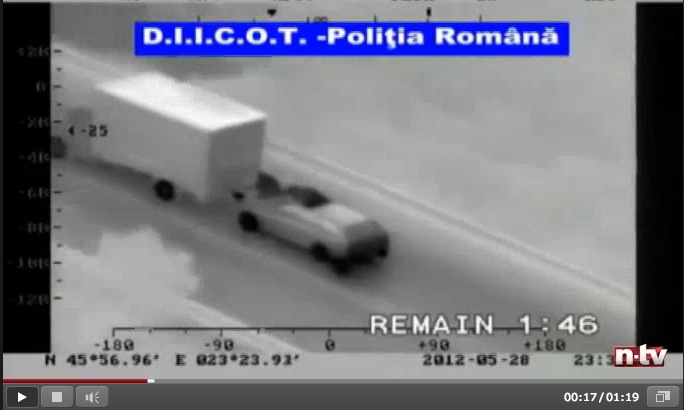 The video screenshot above is a re-enactment from Romanian TV

Some “James Bond” thievery was reported in Germany yesterday. According to the story, thieves pulled up behind a moving truck carrying Apple products on its way to the Czech Republic. They then got out and climbed onto the hood of the SUV, broke open the truck’s door and removed about 160 iPads and iPhones, all while the truck driver was unaware and unable to see anything happening.

The Google translation is almost as entertaining as the video re-enactment:

How hurrying officials of the police station Kassel-east and the staff of the forensic noted the perpetrator had the security lock of the tarp apparently cracked with a bolt cutter and stole a total of seven loaded pallets of electronics products high quality Apple products worth a total of around 70,000 euros.

The loot includes according to the police 125 iPads, four iPad mini, “probably” 30 iPhones and two keyboards of the Californian cult group. In the further investigation, the suspicion compacted that the cargo thieves had apparently slammed unnoticed while driving on the highway.