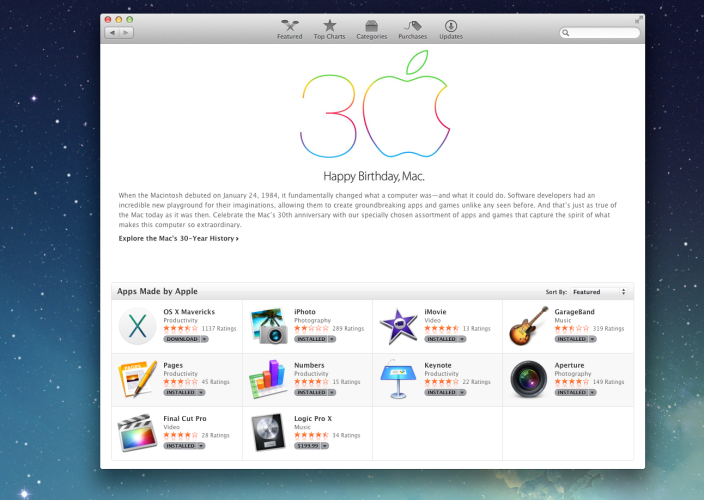 Continuing the Mac’s 30th anniversary celebration, Apple has a new featured section in the Mac App Store with a number of apps it says ‘capture the spirit of what makes this computer so extraordinary.’

When the Macintosh debuted on January 24, 1984, it fundamentally changed what a computer was—and what it could do. Software developers had an incredible new playground for their imaginations, allowing them to create groundbreaking apps and games unlike any seen before. And that’s just as true of the Mac today as it was then. Celebrate the Mac’s 30th anniversary with our specially chosen assortment of apps and games that capture the spirit of what makes this computer so extraordinary.

In addition to Apple’s own apps, it features a number of third apps including 1Password, Evernote, Pixelmator, Fantastical, and more in addition to a section dedicated to games.

Apple has celebrated the Mac’s 30 years in other ways as well including a custom home page and timeline, interviews with Macworld and ABC, an Apple Store display, and more.