Just a few days later after Apple CEO Tim Cook expressed his thoughts about the NSA and data collection transparency, Apple has posted an update to its website with new information regarding account data requests. The company’s press release comes as US Department of Justice comes to a settlement with technology companies over how they are allowed to disclose information about government data requests.

A statement from the DOJ explains the agreement will allow “detailed disclosures about the number of national security orders and requests issued to communications providers, and the number of customer accounts targeted under those orders and requests including the underlying legal authorities.” Due to these new guidelines, Apple has now been able to report FISA and National Security Letters separate from law enforcement requests as show in its graphics above and below.  It also notes the new data released today replaces the U.S. data from its Feb. 5 2013 Report on Government Information Requests.

Apple has been working closely with the White House, the U.S. Attorney General, congressional leaders, and the Department of Justice to advocate for greater transparency with regard to the national security orders we receive. We believe strongly that our customers have the right to understand how their personal information is being handled, and we are pleased the government has developed new rules that allow us to more accurately report law enforcement orders and national security orders in the U.S.

Apple CEO Tim Cook said in a recent interview that he would push congress for more transparency regarding controversial surveillance programs and how companies can disclose information related to information requests. At the time, Cook said that there was much the company couldn’t speak about due to gag orders:

Number one, we need to be significantly more transparent. We need to say what data is being given, how many people it affects, how many accounts are affected, we need to be clear. And we have a gag order on us right now so we can’t say those things… .Much of what has been said isn’t true. There is no backdoor. The government doesn’t have access to our servers. They would have to cart us out in a box for that, and that just will not happen. We feel that strongly about it.

The full press release from Apple is below with the actual data on requests pictured above. 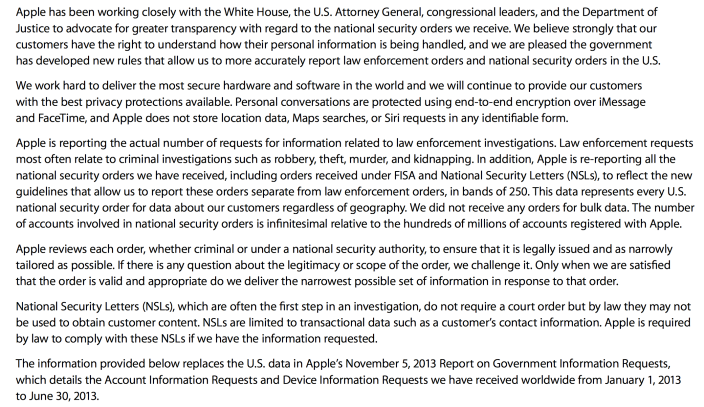